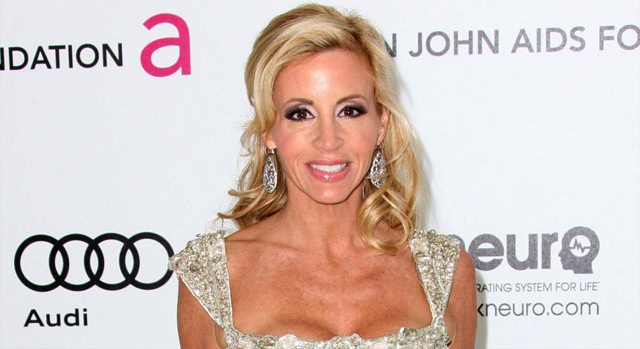 via Radar Online:
Camille Grammer is staying away from her Malibu home and is essentially in hiding as her ex-boyfriend, Dimitri Charalambopuolos, is being investigated for allegedly violating the restraining order against him, Radar Online.com is exclusively reporting.

The former The Real Housewives of Beverly Hills star obtained a three-year-long restraining order against Charalambopuolos in January after she made allegations that the Texas lawyer physically assaulted. Commissioner Matthew St. George granted the order following an October 16 incident in a Houston hotel room during which he is alleged to have slammed her head into furniture and grabbed her by her hair.

But earlier this week, while Grammer was out of state, Charalambopuolos and an unidentified woman are alleged to have shown up at the former reality TV star’s home.

“They drove up to Camille’s home and the woman told the security guard that they had an ‘appointment with Ms. Grammer’,” a law enforcement source tells us.

The security guard obviously did not let them in, and immediately notified his boss of the suspicious encounter. He thought the man in the car might have been Charalambopuolos.

“Camille wanted to make sure who it was and had her security team pull the surveillance video at her gate. She viewed it and positively identified her ex as the man trying to gain access to her house,” says the source.

“This is terrifying for Camille,” the source tells us. “She doesn’t know where Charalambopuolos is now and is staying away until law enforcement knows more.”

More in Real Housewives Of Beverly Hills (377 of 790 articles)