Well the action is slowly warming up, many of you told me you thought it was boring 😉 but in fairness, we have to get the feel of our new cast members so when they finally let go, then we can have a really good laugh at them, or not!

I’m looking forward to seeing Carole rip roaring drunk listening to Lulu read her book to her, on class with the countess :). I cant wait to see Heather rip Ramona a new one and maybe end up speechless, because we just know that it has to be a sure thing eventually.

Sonja is going to suck too much vino and give Aviva a ‘blow by blow’ account of her steamy nights in the hot tub wit her ex husband. Lulu giving birth to a (was going to say Escargot but my boyfriend said that was much to harsh, so I agreed to a baguette instead).

Its ALL ahead folks! So don’t give up on them yet.

So where were we? The ladies were lunching down town, I laughed out loud at Carole’s surprise that Sonja and Aviva could 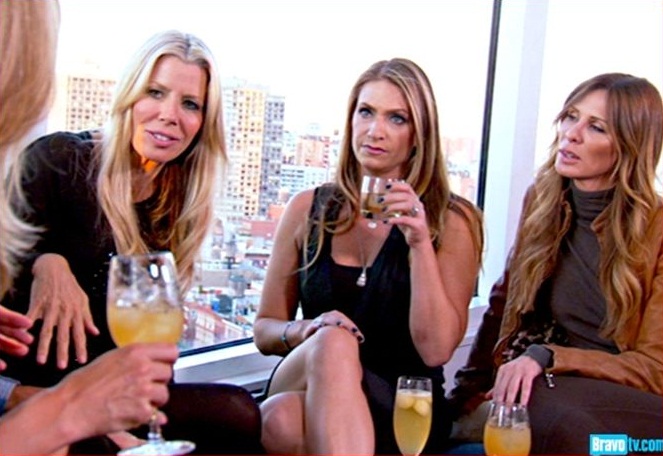 ever ‘do’ the subway in NYC! Not everyone is as hip as you Carole. According to ‘American boy’ – Kylie doesn’t do the subway there either 🙂

For starters WTF was Heather wearing? An awful half a skirt but LOVED I Aviva leather hot pants! She is one woman who can get away with not looking like “mutton dressed as lamb“. Some should take note.

Who the hell is this Harry that slept with half of New York? I have to say, I couldn’t just sit there listening to how great a shag my ex husband was. Call me old fashioned but that’s just wrong.

Carole “Everyones f–ked Harry”, apart from Carole because she said she doesn’t put out – bet she’s happy about that one 🙂 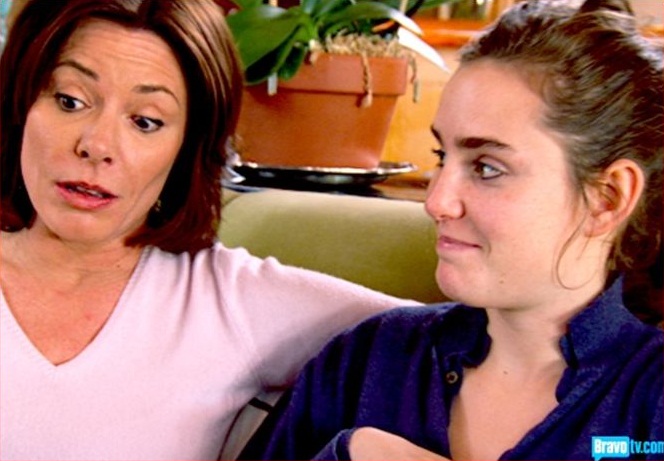 Lulu sitting having a remarkably staged, very personal conversation, about having another child with her teenage daughter. Cringe worthy. Hide behind newspaper moment. *Phony alert and fashion police reported on the eighties fade washed jeans too btw*

Back to the roof top with the party girls, Sonja was on flying form and had the best line of the week “No more pimping your husband out with those powder blue socks, hush puppies, no ring and a lumberjack do it to me now shirt”. That was a great line darling!

So Aviva bathes her kids in high heels and a lace dress. Is that what real housewives wear doing that? Take note everyone. Her kids are sooo cute by the way. It was a very sweet shaving scene and the fact that her husband, Reid looked very worried about his son shaving his legs, and in fact bought it up twice! It could have been worse, he could have been shaving his private area on TV 😉

Ramona in her empire with card board cutouts of herself adorning the office. Reminded me of the Remington Steel shaving guy who ‘I liked it so much, I bought the company‘ tag line. Remember him? 🙂

Sonja’s business plan on the side of the WP newspaper, now that’s priceless. Love Sonja in the City! Brilliant idea and lets face it a **** site more interesting and more like the lady herself than the toaster oven. Sorry darling, but you are way to much fun to bore yourself (or us for that matter) with the toasters get someone else to cover that for you and go rock the NYC party scene and be paid for it!!

Carole: “I only flirt with husbands when the wives are sitting right next to them”. That’s very reassuring, I’m sure 🙂 Ramona’s 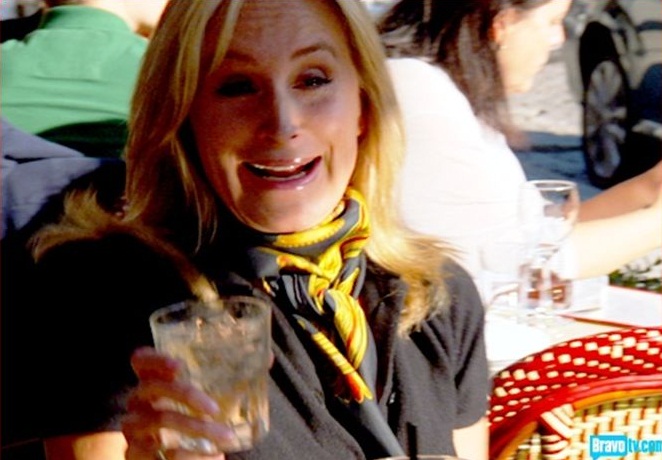 eyes were so far out she could almost have stirred her drink with them watching Carole with old Mario the Adonis.

Heather. Shes super smart and I find people who are passionate about there careers attractive. Good advice to Sonja…blah blah blah, then bam, a trip to London. Now that’s more exciting 🙂 looking forward to that episode. Sonja ” I hate to tell you, but I’m really connected there” that ‘selection’ will no doubt be entertaining!

Here is to the fact that Carole has become in my opinion the coolest, who is the most naturally stylish in the franchise as well as being one of the only housewives who somehow doesn’t let hair and makeup in the interviews make her look like a cast member of Dallas back in the day. SONJA! Never let that woman near you again, you hear me? LOL (I’m speaking from experience of being made to look like a Ukranian washer woman on many an interview.

Aviva needs some fly away stuff cos she looks like she has been rubbing heads with too many balloons in lots of scenes. I hope she’s not going down the road of the sweet to your face and butter wouldn’t melt and all that, then stirring the pot the minute you turn your back? Hmmm, we’ll see…

Ramona “Heathers problem with me is I’m basically everything she’s not” OMG Ramona! So quick to tongue whip on her! Why such a big problem with Heather? Oh and by the way, I’m sure Heather thanks the lord for that! 🙂

Did Ramona really say “Lets get a coffee, its too early for wine?” I had to rewind that 10 times to check it really was her. Then I saw a clock in the back ground saying 8:45am. OK then.

I think next week’s epsiode is going to start to kick in and speed up, until then.