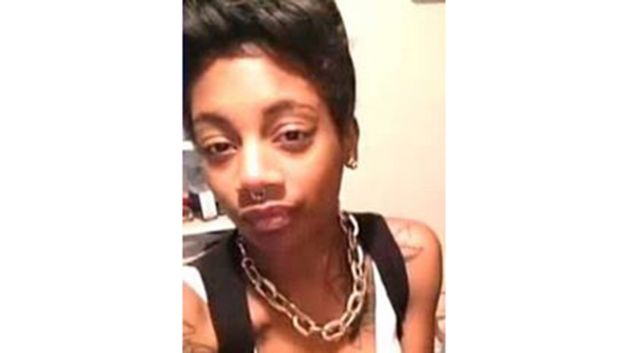 Dash-cam footage from inside the vehicle shows Adley Shepherd hitting Miyekko Durden-Bosley, 23, after she kicked the officer in the head while under arrest on June 22. But prosecutors said that Shepherd had ‘acted professionally’ and concluded they did not have enough evidence to prove his use of force wasn’t necessary. Officer Shepherd arrested an intoxicated Durden-Bosley while out on patrol. She then protested, claiming she had not made any threats and had not been violent to her partner. Frustrated, she is then heard saying ‘f*** you bitch’ during the footage before kicking the officer. The strike is not seen on camera. Shepherd reacts by pushing her into the back of the patrol car and punching her in the eye.

via Seattle Times:
King County prosecutors will not file felony charges against a Seattle Police officer seen on video punching and seriously injuring a handcuffed, intoxicated woman after arresting her for investigation of domestic violence.

The decision, which has been pending since September, comes as a public outcry grows over incidents in Missouri and New York, where police officers have not been prosecuted despite using deadly force against unarmed individuals. In Seattle, protesters have gathered nightly downtown this week to express their outrage over what they consider a lack of police accountability.

The June 22 incident was captured on the officer’s dash-camera and shows Officer Adley Shepherd, 38, punching the 23-year-old woman, identified as Miyekko Durden-Bosley, who appears to be intoxicated and was protesting her arrest, claiming she had not made any threats against her domestic partner.

After being handcuffed and placed in the back of a patrol car, Durden-Bosley can be heard on the video saying “(expletive) you bitch,” and reportedly kicked out at Shepherd, according to a search warrant and an investigation into the incident conducted by the Washington State Patrol.

The video — which was captured by a rear-facing camera in the patrol car and has not been publicly released — does not clearly show whether the kick struck Shepherd, although he can be heard saying, “She kicked me,” according to the documents.

Shepherd responded by punching the shackled Durden-Bosley in the face once with his right fist. The blow fractured bones in the area of Durden-Bosley’s right eye, according to medical records and court documents.

In a news release issued Friday, King County prosecutors said they found that Shepherd had “acted professionally and with restraint up to the point where he was kicked in the head by the suspect as she was being placed in the patrol car.

“Officer Shepherd reacted instantaneously to the kick by the suspect, who was wearing boots, with one punch to the suspect’s head which caused a fracture of an orbital socket.”

Shepherd, who has been on paid leave, still faces possible discipline within the department.

Shepherd and Durden-Bosley were both treated at Harborview Medical Center, where Washington State Patrol investigators later served a search warrant for medical records. After the kick, Shepherd is heard on the video saying, “My jaw is jacked,” and complained of soreness in his jaw and a shooting pain in his face. However, the records obtained from Harborview showed “no obvious injury.”

In approving the search warrant, King County Superior Court Judge Sean O’Donnell found, based on an affidavit by a State Patrol investigator, that there was probable cause to believe Shepherd committed the crime of felony second-degree assault.

The case has been under consideration for felony charges by the King County Prosecutor’s Office. In October, prosecutors were provided with a report authored by Robert Bragg Jr., who oversees use-of-force training for the Washington State Criminal Justice Training Commission. He determined that Shepherd’s actions were inappropriate, inconsistent with best practices and inflicted unnecessary injuries to the woman.

The State Patrol, which was called in to investigate by the Seattle Police Department, found that it was not clear whether Durden-Bosley’s kick connected with the officer, even after the video was enhanced by the FBI and a private video company.

Durden-Bosley was taken to jail after her injuries were treated, and she spent four days in jail for investigation of assaulting a police officer before the case was dismissed.

The punch was serious, but so is kicking a cop in the head. What are your thoughts? Post your comments below.