That ye may be the children of your Father which is in heaven: for he maketh his sun to rise on the evil and on the good, and sendeth rain on the just and on the unjust. Matthew 5:45 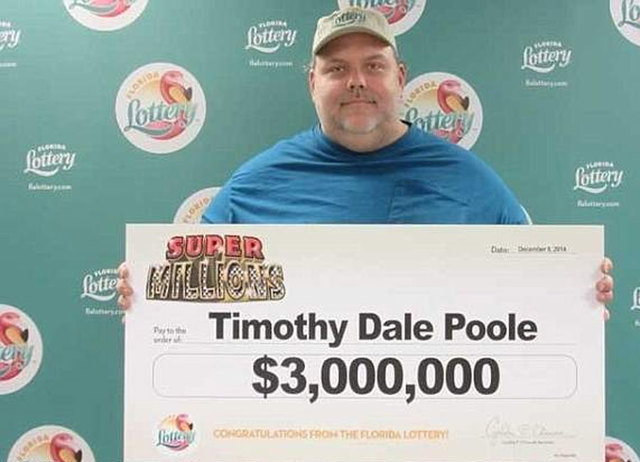 via Click Orlando:
A convicted sex predator who served 3 years in prison for a crime involving a young child is now a multi-millionaire. Timothy Dale Poole won $3 million on a Florida Lottery scratch-off ticket he purchased at a Mount Dora 7-Eleven store Saturday night.

“He was flabbergasted. He couldn’t believe it,” said Floyd Snyder, a friend who was with Poole when he hit the jackpot. “It was quite a remarkable thing. My heart is still beating.”

Poole was among the subjects of a recent Local 6 investigation that examined where convicted sex predators are employed. Poole is driver and dispatcher for Triangle Cab, a Mount Dora taxi company owned by his mother, records show.

In 1999, Orange County authorities arrested Poole following allegations that he sexually battering a 9-year-old boy. According to an arrest warrant affidavit, Poole was a friend of the victim’s family who once lived at their home. The victim also spent some weekends at Poole’s home, according to investigators.

“He said Tim would sleep in the same bed as him at his house” and perform a sex act on the child, the detective wrote in the affidavit. “He said sometimes Tim would wake him up from sleeping to (perform a sex act).”

Poole denied the allegations, according to the report.

As part of a plea bargain, Poole pleaded guilty to attempted sexual battery and was sentenced to the 13 months he had already served in jail. The judge also ordered Poole to serve 10 years of sex offender probation and register as a sexual predator. A judge can designate someone as a predator if the defendant used physical violence, preyed on children or had repeat violations.

In 2003, a judge revoked Poole’s probation and sent him to prison for 3 years. According to court records, Poole was kicked out of his mandatory sex offender counseling because he failed to attend 4 group sessions.

Poole, who has had no other legal troubles since being released from prison in 2006, insists he is innocent.

“It may be hard for some to believe, but sometimes people are wrongly accused,” Poole told Local 6 in November.

“I’ve known him for years and I’ve never seen any inclination of anything like that with him,” said Snyder, who believes his friend should enjoy the $3 million lottery jackpot. “He’s a very positive person. Very kind. Giving. I think that’s why he won. It’s Christmastime and the dude deserves a break.”

Poole turned in his winning Super Millions scratch-off ticket at Florida Lottery headquarters in Tallahassee on Monday. Lottery officials said he chose to receive his winnings in a one-time, lump-sum payment of $2,219,807.90.

Florida law does not allow the lottery to withhold payments from winners based on their criminal records, according to spokeswoman. However, before a winner receives a check, Florida Lottery officials conduct a background check using their Social Security number to ensure they do not owe child support or any outstanding debts to a state agency.

Poole could not be reached for comment following his lottery win, so it is unclear what he plans to do with his millions. According to Snyder, Poole will be pouring some of that money into his mom’s small taxi cab company.