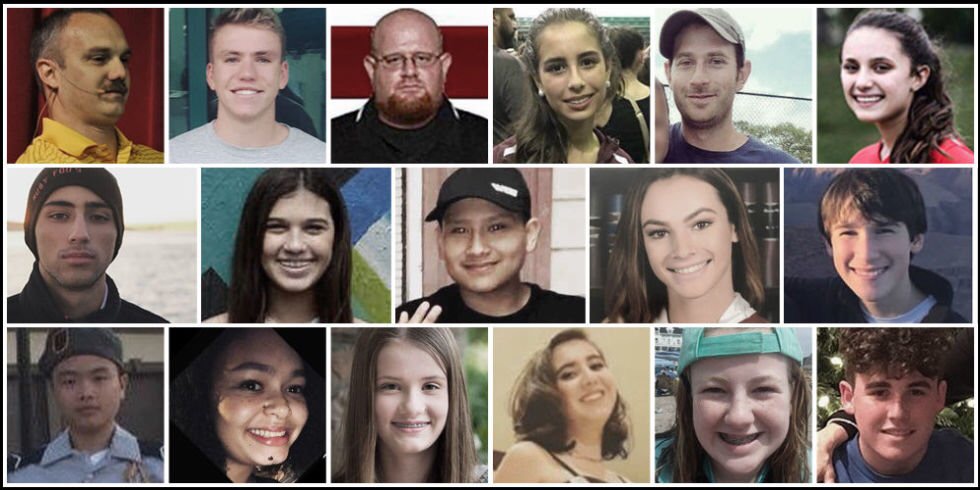 Hixon came from a family with an extensive background in the military and served in the U.S. Navy. He also was a huge influence on the school’s wrestling team and was killed while patrolling the school’s campus as part of his job as security specialist.

Nicholas was a swimmer at the school who had committed to competing at the college level at the University of Indianapolis at the beginning of February. He was named by the Sun-Sentinel a second-team All-County swimmer in Broward County for his 100-yard freestyle time.

His brother, Alexander, was grazed by a bullet in the back of his head.

Feis died while using his body to shield students from bullets as the gunman opened fire.

Broward County Sheriff Scott Israel, a personal friend of Feis’, noted that the Marjory Stoneman Douglas High School alum and former football player was a beloved protector of those in the community.

Gina’s family described her as a hardworking student with a keen sense of humor who “melted each heart with an infectious smile that light up a room.”

“She was a kind spirit, always eager to lend a helping hand,” the family said in a statement. “Gina will be missed not only by her family, but by everyone whose life she touched.”

Beigel was one of several adults at the school who died while protecting students from streams of gunfire.

According to the Sun-Sentinel, Beigel was shot and killed when he unlocked his classroom door in order to allow students to take refuge from the gunman. He was mortally wounded while trying to re-lock the door.

Alyssa wanted to become a lawyer as well as a professional soccer player, according to her mother Lori, who attended a vigil for victims on Thursday.

She was a member of the school’s Parkland Soccer Club, who honored her in a Facebook post.

Joaquin was a hip hop and sports lover who became a naturalized American citizen in January 2017, after moving to the United States from Venezuela at the age of 3, according to the Sun-Sentinel.

Because students often had difficulty pronouncing his name, Oliver went by the nickname “Guac,” short for “guacamole.”

“He’s just a goofball. He’s the only kid you’d know that would dye his hair bleach-blond, walk around school, put some tiger stripes in and just be unique. He was a unique soul,” said Tyra Hemans, 19, who said she had been friends with Oliver since freshman year.

Last September, Carmen was named one of 53 National Merit Scholarship Program semifinalists in the county. She was one of 10 Douglas students to qualify as a semifinalist, according to The Eagle Eye, the school’s student-run news magazine.

Carmen was also a piano student who had performed on Saturday at Broward College for the South Florida Music Teachers Association Spring Festival.

Martin was described as “a very funny kid, outgoing and sometimes really quiet,” in a description posted by his older brother, Miguel, on GoFundMe.

According to the Sun-Sentinel, Miguel also paid tribute to his brother on Instagram, stating, “Words can not describe my pain. I love brother Martin you’ll be missed buddy. I know you’re in a better place. Duques forever man I love you junior!!! R.I.P Martin Duque!” The caption was accompanied by a photo of Martin.

According to her cousin, Jake Maisner, Meadow was the youngest member of her family and enjoyed spending time with her family, the ­Sun-Sentinel reports.

Maisner also added that his cousin had planned on attending Lynn University in Boca Raton after she graduated.

According to a GoFundMe page setup by Schachter’s family in the wake of his death, Schachter played the trombone and baritone as a member of Douglas’ marching band.

Schachter’s family stated on the page that “He was a sweetheart of a kid!” and “survived by his heartbroken parents, three siblings, grandparents and countless cousins, aunts, uncles and friends.”

Peter was a member of the JROTC program at Douglas. His cousin, Aaron Chen, told the Miami Herald that Peter was last seen wearing his uniform and holding the door open so that people could escape. He had planned on celebrating the Chinese New Year with his family.

Peter’s friend, Gabriel Ammirata, also told the paper that he “funny, nice and a great friend. He’s been my best friend since third grade.”

Her relative, Curtis Page Jr., posted on Facebook that Helena was “a smart, kind hearted, and thoughtful person. She was deeply loved and loved others even more so. Though she was some what reserved, she had a relentless motivation towards her academic studies, and her soft warm demeanor brought the best out in all who knew her. She was so brilliant and witty, and I’m still wrestling with the idea that she is actually gone.”

Page also noted that Helena was planning on going to college next year.

Alaina was extremely devoted to her local community, according to a statement made by her family via the Latter-day Saints Living publication.

“It is important to sum up all that Alaina was and meant to her family and friends,” the statement said. “Alaina was a vibrant and determined young woman, loved by all who knew her. Alaina loved to serve.”

Luke was described as a “good kid” who “never got in trouble” by his grandparents, who live in South Carolina.

His uncle, Toni Brownlee, also posted about his death on Facebook: “This has devastated our family and we’re all in shock and disbelief. Our hearts are broken. Luke was a beautiful human being and greatly loved.”