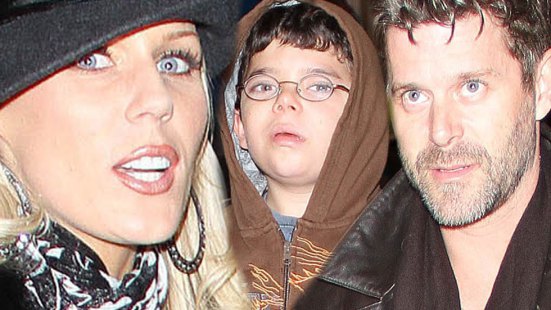 Gretchen Rossi and Slade Smiley are fighting back after reports that they partied instead of visiting his sick cancer-stricken son Grayson in the hospital by claiming that Grayson’s mother never told them he was being hospitalized. The former Real Housewives Of Orange County stars say that Grayson’s mother and Slade’s ex-girlfriend Michelle Arroyo failed to call them and notify them of his recent hospitalization. Gretchen said that the reports were “absurd” and that her surprise 31st birthday party took place during a different time frame than when Grayson was hospitalized anyway. Grayson Smiley is 13-years-old and battling multiple forms of rare brain cancers.

“Michelle made a Facebook post on Saturday, November 1, for everyone to see that Grayson went into the hospital. She did not even notify Slade about it and he had to find out through a third source, which personally I think is wrong. When he called Michelle to find out what was going on she said because of Grayson’s compromised immune system they admitted him to the hospital, but that he was fine and was released from the hospital. The individuals and blogs who continue to use his son’s illness to promote false information in order to try to make us look bad or claim that Slade doesn’t care about his son are disgusting. Obviously they are just trying to drive traffic to their websites. Slade loves Grayson very much and just so it’s clear he would ALWAYS choose to be with his son over anything else — unfortunately he is not always given that choice.”

Slade has battled with Michelle Arroyo in the past regarding late child support payments for their son Grayson. Slade and Gretchen are currently undergoing in-vitro fertilization in an attempt to have their own child after being let go from the Real Housewives Of Orange County this past season. What are your thoughts? Post your comments below.