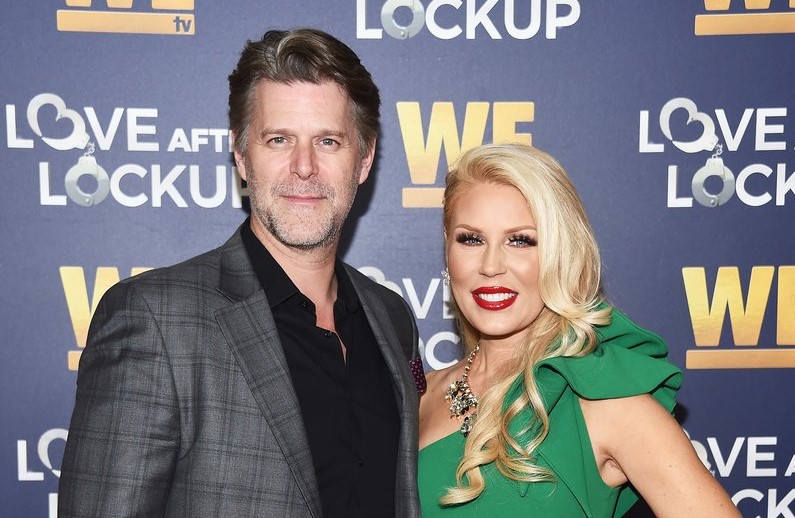 Former Real Housewives Of Orange County cast member Gretchen Rossi, 41, is going to be a mother, she is expecting her first child with fiancé Slade Smiley, 50.

The couple announced on an episode of The Doctors Monday.

“It’s pretty exciting that we have our little Christmas miracle. It’s been a little bit harder than I definitely anticipated. I think they lie to you when they tell you you’re gonna get morning sickness. They lie to you — it’s all day sickness! But the good news is that my doctor told me that’s actually a good sign,” says Gretchen.

Gretchen is due in July 2019 and is 10 weeks along, and the couple will be celebrating 10 years of being boyfriend and girlfriend in February.

The couple first decided to purse in vitro fertilization (IVF) about four years ago, years after Slade’s vasectomy.

Gretchen On IVF
“We knew that we had to go through IVF in order to get pregnant. We went through a round of IVF and in that round we had 14 embryos that came out of that. We were so excited and just beyond ecstatic about the results.”

Six hours before they were going to implant, the pair received a phone call from the doctor “saying that all of the embryos had arrested and basically died.”

Gretchen on losing their embryos:
“We were just beyond devastated. I couldn’t even get out of bed because you just go from such a high thinking within the next 24 hours you were going to be pregnant to losing everything and losing 14 embryos. That was really, really hard for me and Slade to come out of that. I was in a deep depression after that. I’ve never really suffered through that or been in that circumstance before. We all get sad at times, but I really went into a depression and I couldn’t even think about or talk about IVF or trying to get pregnant again because physically, mentally, emotionally, financially, spiritually, it just breaks you.”

For Gretchen’s 38th birthday, Slade had scheduled a vasectomy reversal, which he underwent at the end of 2016.

Gretchen on Slade’s vasectomy reversal
“It was so sweet, it was so kind. He had already done one surgery for us, but now he’s going in for a second surgery.”

The couple were unable to get pregnant after 18 months of trying.

Slade after trying to get pregnant:
“It is very challenging for them to be able to go in and actually find success in the reversals. That’s ultimately why we decided to go forward with IVF first because the success rate on the reversal was a lot lower,” says Smiley, who has two sons — Gavin and Grayson — from previous relationships. Gretchen was allergic to some of the injections and we had a really hard time with the round, I didn’t think it was fair that she was having to go through everything on her own.”

Not losing hope, Rossi and Smiley “decided to go back to IVF and we decided to try a different doctor and a different facility,” says Rossi.

Gretchen on her fears:
“I was scared. I was a 40-year-old woman going back in to try IVF. We went through two more rounds of IVF and we did not have the same amount of eggs and the same amount of embryos as we did the first round four years earlier. It was scary to sit there and think, ‘Oh my gosh, I retrieved 10 eggs.’ But out of 10 eggs, you only got one good embryo — one genetically sound embryo. And then the second round, the same thing happened. We only got two genetically sound embryos out of all of our rounds, so it was very nerve-racking going into this implantation because it was like, you only get two shots at this.”

Gretchen underwent implantation around the time of Slade’s 50th birthday, in November, the two learned they were expecting.

Gretchen on her relationship with Slade:
“There’s been a roller coaster of emotions through this and I don’t want to pretend, especially for all the couples out there going through this, it’s not an easy journey — it really is not. Yes, we have definitely grown through this, thank goodness. Now we have realized how much closer we’ve come through this process. When you’re having your partner having to shoot you in the ass every morning with the needle and when you’re going through as many shots as you’re going through and mood swings and the ups and the downs and just everything, it definitely bonds you together and brings you back together.”

They’re also grateful for the community that has been created as a result of sharing the ins and outs of their IVF journey with their fans.

Slade on IVF:
“I have to commend Gretchen and I try to as often as possible because this is not an easy topic to discuss or share. She’s been very open and honest about that journey since the very beginning. We’re hoping that this conversation begins a means of helping other people educate themselves and find the support system that they need to find their own success in IVF.”

Lastly Gretchen says:
“I’ve decided just to be really raw and real with my videos and just show the true emotions that one goes through on this journey. I’m so glad I decided to do that even though it was nerve-racking at the beginning because I’ve had so many people reach out and say, ‘You’ve helped me so much with my journey.’ It’s been great to be able to do that for people.”