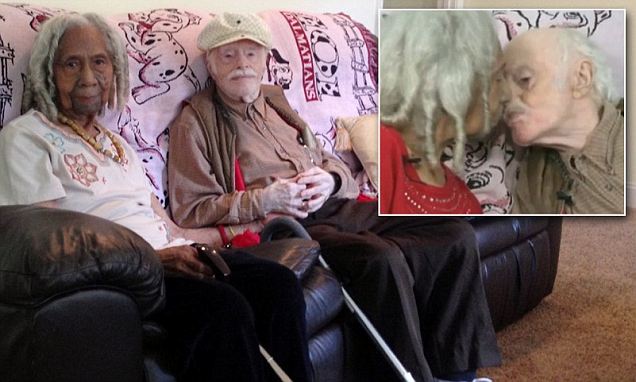 via Daily Mail:
A 95-year-old man has died weeks after his 96-year-old wife was taken from him by family members embroiled in an inheritance row.

Eddie Harrison passed away on Tuesday at a hospital in Virginia following a bout of influenza. He apparently became distressed when one of his daughter-in-laws left home with his spouse, Edith Hill, in a bid to protect her share of assets. The couple married in Alexandria earlier this year after being friends for more than a decade and that’s where the trouble started. Their union was investigated because Hill had been declared legally incapacitated for several years and some family members were worried about their inheritance.

The senior’s estate included property on the edge of Old Town Alexandria, worth about $475,000, according to real estate assessments. There was also concern about who would care for Hill and where she would live. During the investigation Hill and Harrison said they wanted to stay together.

‘I guess I wanted company,’ Hill said in an interview, explaining why she married.

‘I wanted somebody I could help, and they could help me. We were both single. My husband was gone. His wife was gone. We became the best of friends.’

Hill met Harrison after striking up conversation in a queue for lottery tickets, with one of the tickets turning into a $2,500 winner. After years of friendship the duo decided to tie the knot. Along with their age, the interracial aspect of the marriage was also unique, with Hill being black and Harrison being white. In fact, the longtime Virginians would not have been allowed to marry if they had met in their 20s or 30s or 40s, given state’s law banning interracial marriages at the time.

One of Hill’s daughters, Rebecca Wright, supported the marriage while her other daughter, Patricia Barber, contested the arrangement. A judge appointed a new guardian for Hill to protect her interests, removing Barber and Wright as guardians, but decided to leave the marriage intact. On December 6, Hill’s guardian arrived to take Hill away to Barber’s home in Florida for what was supposed to be a two-week vacation.

Police were called to the home during a traumatic 40-minute negotiation to convince Hill to leave, Wright said.

When Hill did not return home as planned after two weeks, Harrison reportedly began to realize she was not coming back. Daisy Birch, a family friend, said Harrison was heartbroken. He also became ill with the flu and checked himself into a hospital.

A dispute continues between the two sisters, Barber and Wright, over Hill’s affairs and place of residence.