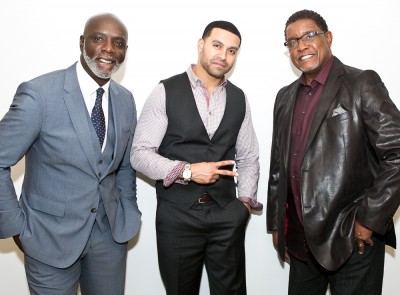 The men on Bravo’s highest rated show ever, the Real Housewives Of Atlanta, Gregg Leakes who recently married Nene Leakes a second time, Apollo Nida, husband to Phaedra Parks and Peter Thomas who’s married to Cynthia Bailey, recently sat down for an interview with Essence magazine and shared what’s it like to be married to reality stars, the publicity etc,. Check it out below.

On Their Wives’ Success
Gregg: “When I met my wife she was already in acting school and she immediately started pilot season. It’s been a long, long, long road. She didn’t get overnight success. She’s put her time in. Just to see her life fulfilled to the point that she called this stuff long ago and to see this come to fruition, just brings tears to my eyes. I know the feeling because I wanted a woman like her all my life and I got it, twice.”

Peter: “I get off on working with my wife. Building with her is probably one of my most favorite things.”

Apollo: “For me, I always want Phaedra to reach for the stars. No matter how big she gets I just always try to be there for her and to bring that balance.”

Gregg: “I want my wife to be successful, I really do. I want nothing more because if she is successful it is going to make me successful. Because I’m going to spend time helping her to obtain her success with what I have to offer, and then in turn, it motivates me to come on my side of the fence to do more for me as well. I want her to be successful it’s pathetic.

On Married Life In Front Of the Cameras

Peter: “The key to being on a reality show and it being successful is to be as honest as possible. It’s easier for us to flow that way instead of trying to come up with something [just for the cameras.] It is our reality.

Apollo: The women are extremely outspoken….You’re just getting a small peak into it. We’re both striving. You got the TV show. We’re new to marriage…two children… new home. Just trying to adjust is a lot of stress on anybody. We go through it like anyone else. What you don’t see is that we are human and we do fight and argue just like anyone else. For her, she’s really not the type of person to want people to see that side, but I had to let her know that this is a reality show and [we’ve got to show our reality.]

On Negative Feedback From Fans On Social Media

Peter: West Indian men have a certain way of being. And, if you don’t understand that, you’re probably confusing it. I read some of the comments and they’re like “Why are you with him?” or “He must be beating her!” They say some real mean things. My wife, she’s a strong person and she could only relate back to a strong man. I couldn’t see her marrying anyone else if he’s not a real stand up type of person. We shoot for hours and you probably see like 2.5 minutes on the actual show. And, probably because this is all sensationalized, you’re seeing the worst two and a half minutes we shot.”

Gregg: “I barely use Twitter. I consider my wife the tree and I’m the apple because I’m not going to fall anywhere far from it and she’s just not going to direct me wrong. As long as I can follow that and everything’s okay and it will be nourished and taken care of. She’s the only thing I care about and that’s it.”