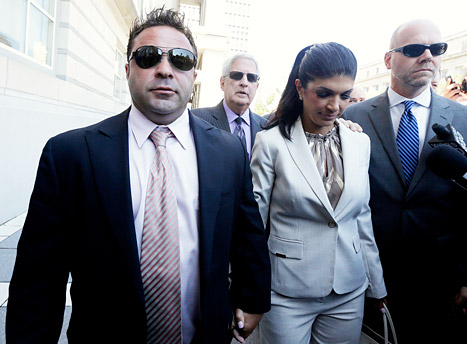 via NJ:
Teresa and Giuseppe “Joe” Giudice, the two stars of the hit Bravo reality TV show The Real Housewives of New Jersey, were indicted yesterday in federal court on additional charges of bank fraud and loan application fraud, adding two counts to an indictment handed up against them in July.

All 39 counts outlined in the original indictment — returned by a federal grand jury in Newark — still stand, U.S Paul Fishman said in a statement. In that indictment, which made national headlines this summer, the Giudices, who live with their four daughters in a multimillion-dollar house in Towaco, were accused of conspiring to fraudulently obtain millions of dollars in mortgages and other loans, and of hiding significant assets and income during their two-year bankruptcy proceedings, authorities have said. Joe Giudice, 43, was also accused of failing to file tax returns from 2004 to 2008, when he allegedly earned nearly $1 million.

If convicted, each Giudice could face dozens years in prison, according to statutory maximum prison terms associated with the counts, authorities say. Typically, though, sentencing judges look to federal guidelines that usually call for less time than the maximum.

Joe Giudice also faces state charges of falsely obtaining a driver’s license. An Italian citizen who says he came to the United States at age 1 or 2, Joe Giudice could face deportation if convicted of the federal or state charges, lawyers say.

The two counts added against each Giudice in yesterday’s indictment relate to a $361,250 mortgage loan Teresa Giudice received in July 2005, authorities said. Allegedly, Teresa, Giudice, 41, and Joe Giudice prepared an application that falsely claimed Teresa Giudice worked as a Realtor and whose monthly salary was $15,000, authorities say. But she was not employed outside the home at the time, authorities allege.

“As she did with respect to the allegations contained in the original Indictment, Teresa intends to plead ‘not guilty’ to the allegations in the new indictment,” Henry Klingeman, Teresa Giudice’s lawyer, said of the two counts brought in the new ‘superseding’ indictment. “She looks forward to defending herself at the trial, scheduled for February 24, 2014. Beyond that, we will answer all of the charges in court, not out.” 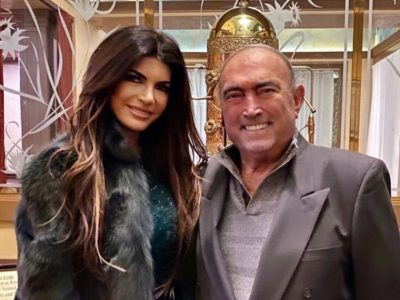