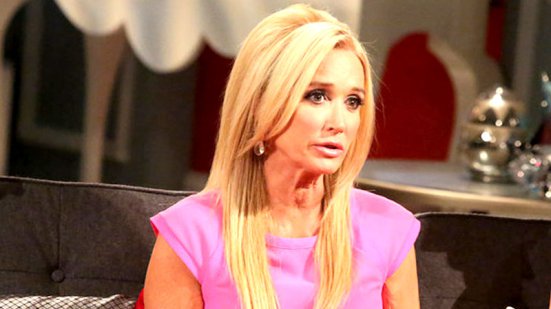 Kim Richards is currently in treatment at a Malibu rehab center for alcoholism and pill addiction. But a source close to the former Real Housewives Of Beverly Hills states that she is in denial about how her erratic behavior in recent months may have led to her getting the axe from Bravo.

“Kim has been telling her friends in rehab that she was not fired from Real Housewives at all. Pretty much no one believes her. Some of the things that she says, she just seem like she is in such denial,” the source says.

Kim was arrested on the 16th April at the Polo Lounge in Beverly Hills, for public intoxication, resisting arrest and battery on a police officer.

The final straw in the RHOBH producers’s decision to fire her after she suffered another relapse while attending her daughter’s wedding in Cabo San Lucas, Mexico, and did not return any calls and inquiries from them for days.

Sources claims she had said that another stint at rehab would convince Bravo to save her, but that was not to be.

A network source, “Kim can paint it however she wants. She knows the truth.”

Lawsuit: Brandi Glanville To Joanna Krupa “I May Be A B*tch But So Are You”

More in Real Housewives Of Beverly Hills (246 of 790 articles)