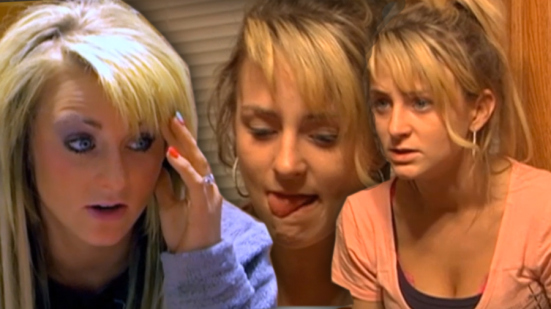 Teen Mom Leah Messer has confirmed that she will not film any more season’s of MTV’s Teen Mom 2 after she believes footage hurt her in her custody battle case with ex-husband Corey Simms. This season, MTV filmed footage of Leah obviously high on anxiety medication where she was slurring her words while on the phone with her doctor. She later said that her doctor got to the bottom of her problem and that it was a reaction to the medication. But Leah’s family is now blaming MTV for making Leah look bad in the wake of her recent drug addiction scandal. A source says:

“Leah was a total zombie. She was so upset and nervous. In order to calm her nerves, she was prescribed anti-anxiety pills by a doctor. Her behavior was a normal side effect of the pills. It took a few days for her body to adjust to the medication. She was clearly not herself. Jeremy told off a cameraman for filming her in such a state. He didn’t think it was right. They knew the extreme stress she was going through. They took advantage of her during a difficult period. People don’t know how much she suffers every day.”

Despite Leah’s alleged drug dealer coming forward and claiming that she purchased multiple pills off of him, the source claims that Leah is prescribed the pain medication Lortab after a botched epidural during the birth of her and Jeremy’s daughter Adalynn left her in immense pain. Leah and Jeremy are currently separated with many suggesting they will end up divorced. What are your thoughts? Post your comments below.