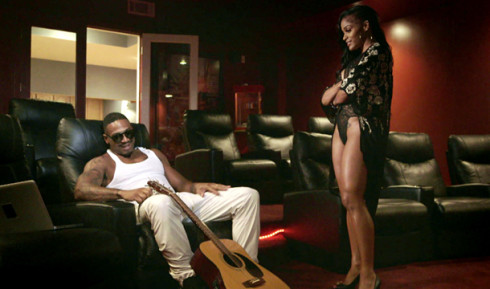 Next up is Karlie, she is filming “30 Days In Atlanta”, is this straight to video movie? Karlie is now “dating” Yung Joc. Karlie is concerned about him flirting with other women and cheating on her. Her solution is that they should live together. Karlie is 46 and thinks this will stop a man from cheating. Poor thing hasn’t learned a thing from her almost 5 decades on this earth. Yung Joc isn’t sure about another serious relationship as he was married for 10 years previously. 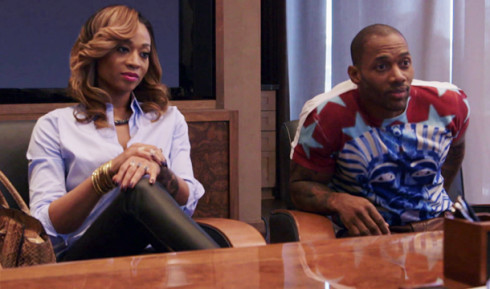 Mimi couldn't sue to get that tape shut down???? #LHHATL

Lil Scrappy visits his mother and continues with his cotton ball speak, they need subtitles for him. The Momma’s Boy, kinda sorta, tells his mother he doesn’t want her meddling in his relationship. Momma Dee wants her son to continue dating lots of women. Lil Scrappy doesn’t realize he is one of his mother’s whores. Lil Scrappy threatens his mother that he will dabble in her relationship if she doesn’t back off.

Kirk goes motorcycle shopping with Benzino as Miss Shirleen destroyed his last bike by running her SUV over it after his treatment of her daughter Rasheeda. Kirk claims he loves Rasheeda, but he needs sex, Rasheeda is not giving him any allegedly. Benzino tells Kirk all the positives about Rasheeda, she’s a hard worker, a good mother etc,. Kirk still believes that Karter isn’t his as Karter is light skinned. Has the term light skinned changed? Karter is NOT light skinned their first son is lighter than Rasheeda! Did Kirk test him? Kirk decides to give Karter a DNA test.

Mimi and Nikko arrive in LA to meet with Steven Hirsch CEO of Vivid Entertainment. Steven claims they “acquired” the tape, Mimi tearfully asks how did they get the tape? Steven states there was a non dis-closure agreement signed, meaning Nikko signed a non-disclosure or someone from Mona’s camp did. Couldn’t they have sued for the tape since it was stolen? Mimi continues with the crocodile tears. Nikko wonders what they should do. This scene is hilarious. Steven’s assistant walks in with the contract and a Montblanc pen if they decide to sign it. Nikko pretends to read it. Mimi signs the contract, she and Nikko are now bonafide porn stars.

Erica invites Lil Scrappy out for drinks to talk. They haven’t spoken much since she gave back the engagement ring. Erica claims that Lil Scrappy has been texting her that he wants to wait for her. Lil Scrappy tries to deflect the subject, when Erica asks her about those text messages. Lil Scrappy is not over Erica but claims he is happy for Erica. She invites him to meet her new boyfriend, he says never.

Karlie walks in on Yung Joc entertaining strippers conducting business. Karlie is not happy. Yung Joc is not serious about Karlie at all, he is immature and Karlie is a door mat. Karlie presses the issue about living together. Yung Joc surprises Karlie that they are going to close on a house in two weeks. Only problems will occur with that …

Lil Scrappy meets up with his future baby mama, Erica Pinkett who he calls a homey, just like Shay Johnson was a honey. They talk about Erica Dixon and his current relationship.

Kirk decides to swab Karters mouth and his, for the DNA test.

Stevie J invites Mimi out for drinks to talk. Mimi congratulations Stevie J on his marriage and new mansion. Stevie asks about the pictures and threatens to take Eva away from Stevie J. Stevie J goes in search of Nikko and wants to know if Nikko leaked the pictures and the tape. They try to fight but security does not allow it.