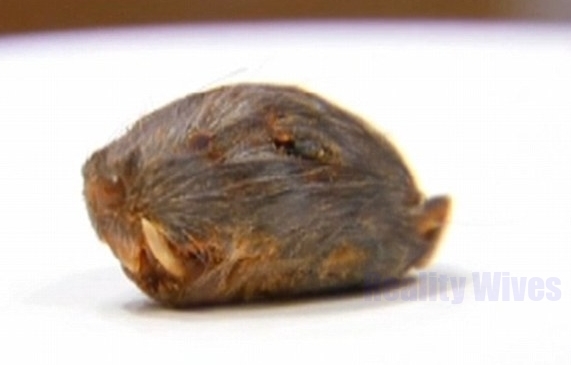 via KLTV:
A diner at a Golden Corral in Florida says he received an unwelcome surprise in his chili.

The diner, Billy Wilson, says he frequents the Golden Corral for their healthy options and friendly staff. He said, “It’s usually pretty great,” and ,”I go maybe once a week.”

After a strange discovery in his chili, Wilson says he will never go back. “The first bite I took out of it was a crunch, and at the time I was like, maybe you know, sometimes you get a hard bean inside of the chili,” said Wilson.

This time, the crunch was something else. Wilson says he immediately spat out a gray rodent, which he thinks is a rat’s head with curly ears and a snaggle tooth.

“When I saw it, I just went into the bathroom and threw up. I was like, ugh, I just couldn’t get the tase out of my mouth,” said Wilson. He added, “It was just nasty.”

Unsure of what to do next, Wilson says that’s when his friends called the waitress. He says she called the manager, who immediately addressed the complaint. “He inspected and was like wow, that is a rat. So, he took pictures of it, moved it around a little bit, took pictures in different angles. He was like me, he was horrified,” said Wilson.

The restaurant comped his party’s meal, but the next day he felt queasy and went to the emergency room at Cape Coral Hospital. He said, “I brought the rat up to the ER and they were all horrified, they couldn’t believe it.”

Discharge documents show that Wilson was treated for Gastroenteritis and was prescribed medications for nausea and muscle spasms.

When asked if he planted the rat’s head in the chili, Wilson said, “I would never do that. They have cameras in there and everything. I’m scared of rats.”

In a statement, the restaurant says it is looking into the matter and has been unable to confirm the alleged incident. They say, it’s committed to delivering a high quality experience in a clean and safe environment.

Ray Racila, Wilson’s attorney, isn’t buying the restaurant’s response. He says taking the case was easy. “Normally you get cases like this, people take food somewhere else, open it up, and something happens. This happened right in the restaurant where there’s no question what happened. The manager is right there,” said Racila.