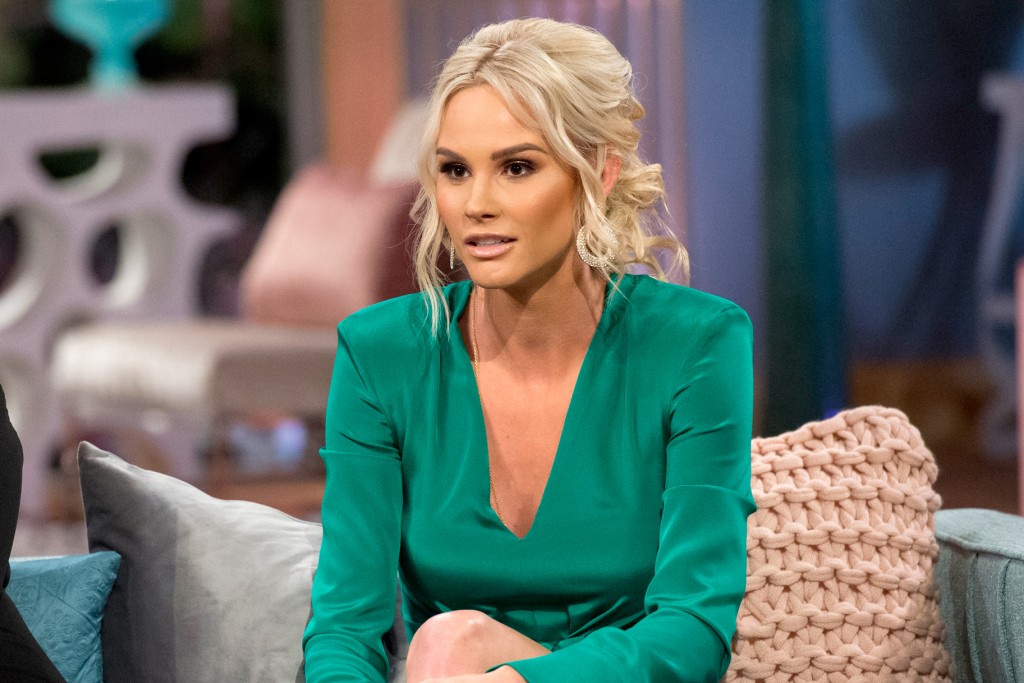 Real Housewives Of Orange County star Meghan Edmonds has decided to leave the reality show. Meghan, 33, wrote on her blog Tuesday that she has “decided to hang up my OC Housewife hat.”

Meghan has appeared on the show for three seasons, cameras captured her struggle with IVF and eventual pregnancy with daughter Aspen, who is now 1. She revealed on the show’s reunion special that she is pregnant again, and announced soon after that she’s expecting twin boys.

I arrived at this multi-faceted decision after much thought, and then I thought some more. As you might suspect filming this show takes a massive emotional toll: I’m literally filming my real life in real time and engaged in situations and circumstances which can be contentious. Then, when the show airs, we relive some of the most trying moments in our lives and then endure the public’s reaction; we never come out as winners to every viewer. But what you might not suspect is the physical toll: filming is grueling! After my first season I knew what to expect for round two, but even still, filming during IVF and then the beginning of pregnancy during my second season was difficult. I was hormonal and tired all the time. But my third season takes the cake: I had a newborn and had to hire a full time live-in nanny (my cousin) so as to allow me the flexibility to meet my obligations of continuous days and long hours of filming, traveling, etc. When I was home I was a full time hands-on mom (you didn’t get to see this) doing all the regular mom stuff including waking up at all hours to breast feed my baby – all while my husband worked his crazy baseball schedule around the US while I was learning how to be a first time mom. Again, I was hormonal and EXHAUSTED. My mind was often foggy as I filmed but I put on a great face and did it because I loved being a Housewife and was so grateful for my opportunity. It was only after the season was filmed that I felt I was finally out of the newborn fog and I could look back on the past few months of season 12 with clarity. I had no idea how exhausted I actually was until I wasn’t exhausted anymore! Season 12 was a real challenge for me.

As I was filming the season 12 reunion I knew in my heart I was done: this wasn’t my place anymore. (The funny thing is that going into the reunion I was so committed to coming back for season 13; just one more season before the twins were born.) I was only 5 weeks pregnant when I filmed the reunion and I was already exhausted. I knew that I was going to have a long pregnancy growing the twins and it would be next to impossible to film. I could do it, but did I really want to? Twin pregnancies must be treated more delicately than a singleton pregnancy and are high-risk by default, so I also wanted to have a peaceful pregnancy with positive influences. Consistent positive influences are harder to find on RHOOC!

I’m sad to leave RHOC, I’m sad to leave Orange County. I wasn’t ready to make this decision for another year but I felt it was time now. In October when I told Jimmy I was finished he urged me to take a couple weeks to think on it before I called Andy Cohen. So I did. And then over Thanksgiving Andy and I met up in our shared hometown of St Louis and I told him about our impending twins as well as my intent to leave the show. He was completely understanding. In fact, all of production has been nothing but understanding and supportive of me and my decisions every step of the way. I have only praise for everyone behind the scenes from the tip top of the totem pole down to the production assistants doing coffee runs for the crew. These people were my family for three years: cleaning up Girly’s Girl’s potty as she got too excited, punching in the code to my front door because I was in the shower, walking around in my robe with wet hair while getting ready to film. One of my fondest memories was after I had done my embryo transfer with what would become Aspen I was laying in bed falling asleep. I’d dozed off and woken up to a camera staring in my face with a camera operator behind it. I remember smiling and feeling comfortable knowing I wasn’t alone. This illustrates the extent to which the staff and crew became an almost constant part of our daily lives, almost like they were part of the family.