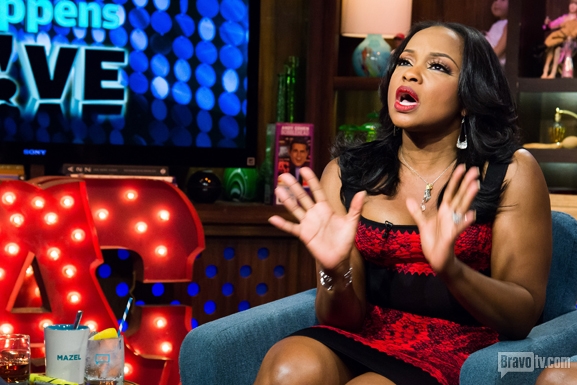 via Radar Online:
Real Housewives of Atlanta star Phaedra Parks is standing by her man!

On Sunday night’s Watch What Happens Live, Parks revealed that she is supporting husband Apollo Nida through his messy fraud charges.

“I will support him until this is resolved,” she told host Andy Cohen on WWHL, which aired after the RHOA reunion show.

PHOTOS: Brawls, Huge Lies & Collapses: The 30 Most Outrageous And Over The Top Reality TV Moments

When asked about speculation her marriage to ex-con Nida was in trouble, Parks said, “No, I have not filed for divorce. I am still very married.”

She flashed her big diamond wedding ring for Cohen and commented, “Check out the bling.”

When Cohen asked if it had been a hard time for the couple, she said, “Of course it is. But we are where we are and we’ll support him. We are a family. He’s the father of my two beautiful kids and at the end of the day, I am a Southern belle and I believe in family and I will support him until this is resolved.”

Parks, the mother of two young sons with Nida (who spent time in prison and appeared in various mug shots before becoming famous on the Bravo show with his wife) also said, “Obviously I have nothing to do with his current issues. He is going to appear [on the next reunion show] and have his own conversation with the lovely Andy Cohen and he will tell you all about his issues and problems and I will sit back quietly and listen.”