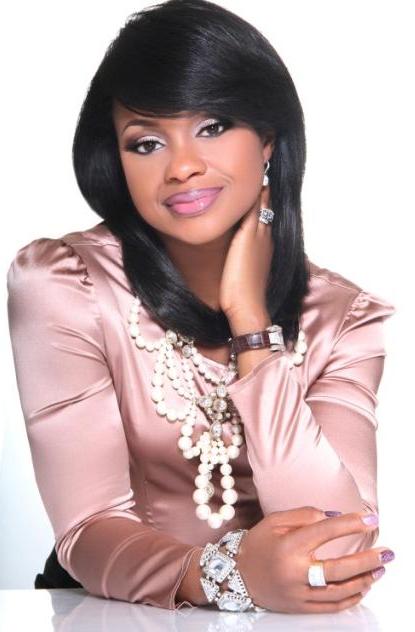 As filming for season 5 has begun for the Real Housewives of Atlanta, the drama just gets juicier, messier and dirtier. Phaedra Parks a RHOA cast member, has filed a $30 million lawsuit against Vibe Holdings, which operates Vibe.com, Uptown Magazine, and Augustus Publishing, saying the outlet has published lies about her to generate interest in a book, which claims the author and Phaedra led a life of crime. No not southern belle Phaedra!

I wonder if Phaedra will allow the Bravo cameras in on this latest gossip fest.

The lawsuit, which was filed this week, demands a jury trial, retractions, $5 million in compensatory and $25 million in punitive damages, and retractions. Yes $30 million dollers. Ms Phaedra is not playing.

While Plaintiff recognizes the importance of the role of the media in reporting on public figures, Defendant and other members of the media are not granted an unfettered right or privilege under the First Amendment to defame public figures by publishing false and defamatory accusations with actual malice. As a result of its conduct, Defendant crossed the threshold from speech protected by the First Amendment to enter the arena of actionable defamation of a public figure for which they must be held legally accountable. In its entirety, the book falsely portrays the relationship between Plaintiff and Stanton as that of friends and accomplices in criminal activity, and conveys a picture of Plaintiff as a crooked attorney engaged in a multitude of criminal acts, who conspires with Stanton to commit these acts, and who then uses Stanton in an effort to escape criminal liability for those acts.

The book in question is written by Anthony Whyte and Angela Stanton, titled, “Lies of a Real Housewife: Tell the Truth and Shame the Devil

“. Miss Stanton alleges that she and Phaedra were not only friends, but partners in crime; literally.

In Part 1 of the video courtesy of Vibe, below Stanton reveals that the entertainment attorney performed fraudulent activity along with her, her husband Apollo and his brother Everrett. After years of her own trials and tribulations, Stanton is ready to tell her story of loyalty and betrayal. Also check out parts 2 & 3 of the interview.

On how she got in on the scam with Phaedra and Apollo
After about a year or so, I guess she became a little more comfortable with our relationship and that’s when she introduced me to Apollo. Once she introduced me to Apollo it was strictly a business relationship that the two of them had. And at that time, they were making fraudulent insurance checks.

I ended up catching a charge and going away to prison. On my first trip to prison, I only did four months, but while I was away at prison, Apollo had also got arrested. So when he got arrested and got banged up at Newton County. I finally got out after doing my four months, Phaedra and I got back together again. This time she introduced me to Everett, which is Apollo’s brother and we were all involved in a federal racketeering scheme against the federal government.

On what the scam entailed
Stealing Porches, Hummers, Cadillacs, Corvettes, any hot whip at that time, you name it we had it! We would basically go to the car lot and write down the VIN numbers of the vehicles that we felt as if we wanted to keep or would make a good sale. Once we recorded the numbers down off the VIN, we would take them back to Phaedra and Everett. Once they had it, they would make a fake identification card and a registration card to match the vehicle. The next day you can take that I.D and registration card and go to another car dealership and tell them that this is your vehicle and they’ll cut you a key for a fee of $185.

Once we had the key we would then go back to the car dealerships after they close and drive off with whatever car that we picked earlier. After that, they would get sent off to the chop shop and once everything was cleaned up, we would take the title, swap the titles out for Georgia titles then take them to another car dealership and trade the car in for a car of lesser value and walk away with the money.

I’m struggling. Like I said Before my mother died, my grandmother died while I was in prison. I had my baby handcuffed to a bed. My babies father, he got life. So of course there is no child support. Nobody will give me a job. Not only am I a convicted felon I’m a single mother. I couldn’t get any housing assistance because I was a convicted felon. I couldn’t get any Section 8 because I was a convicted felon. I even went to the nightclub to dance to support my children. I got hired at the nightclub but when I went to go get my permit they told me that I couldn’t get my permit because I was a convicted felon. But I never gave up. I kept pressing. When I saw the first episode of Housewives of Atlanta, I was shocked when I saw that she married Apollo. Not only was I shocked that she married Apollo I was extra shocked when I saw Everett on the show featured several times. When I found out that Everett worked as a paralegal in her law firm while he was still in a halfway house.

On why she’s hurt
It hurt me when I looked and I saw the episode when the young lady from Destiny’s Child came strolling in her office and was crying saying I’ve been to jail and I just want to get my life together and Phaedra actually had the audacity to cry and then touch her and tell her that she had the golden touch and was gonna help her get her life together. It hurt me when I watched the show and I saw Phaedra giving birth to her baby on the show and I knew that I was handcuffed to a bed when I had my baby and they took my baby from me 24 hours later. It hurt me when I thought about Phaedra who was somebody who was my friend, when I learned that she went and she stood over my mother’s body and she knew that they were framing me. She knew that she had no intention to help me get of the situation that she had created. Somebody had to be the fall guy for the entire operation and it just happened to be me. So my book is not about vengeance, it’s about justice.”

When this book came out I wondered if Phaedra would be silent on the matter, as any additional attention will get more sales for the book which Phaedra has stated is heavily fabricated. Either Angela Stanton is telling the truth, but why take so long to come out with the book or Angela has huge cahoonas, as powerful entertainment lawyer Mrs Parks-Nida will nail her to the wall. So I guess Phaedra won’t be appearing in Vibe Magazine any time soon and she has probably cancelled her subscription to the periodical.

& Angela’s response to the lawsuit? Read for yourself… 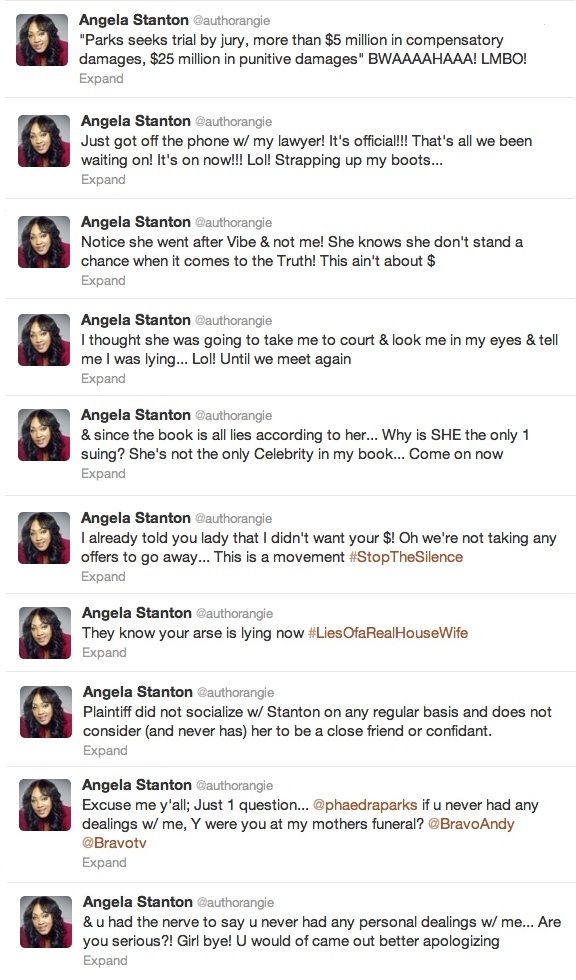 Phaedra isn’t stupid and is most likely suing Vibe as they are the ones with the deep pockets. Lastly it’s rumored that Apollo and Phaedra have separated, he left their home and has an apartment in Atlanta… And these are the Days Of Our Bold Housewives Of Beautiful Atlanta Lives. Season 5 of The Real Housewives of Atlanta should be fun.