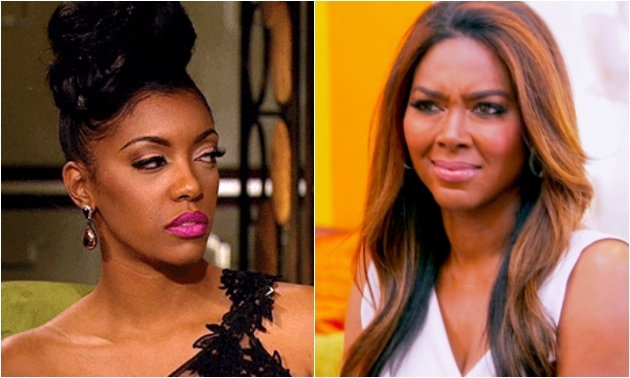 via Radar Online:
Wine and prescription pills proved to be a dangerous mix for The Real Housewives of Atlanta star Porsha Williams.

Just hours before the violent attack on Kenya Moore that ended with her arrest, Radar Online.com has exclusively learned that she indulged in both booze and prescription drugs backstage.

Though cast member Nene Leakes has claimed the reunion was a sober affair, an insider told Radar, “Porsha was drunk… there were two bottles of wine in her dressing room. She came to fight Kenya and needed some liquid courage!”

What’s more, the source alleged that Williams has been taking prescription drugs to deal with depression following the divorce from ex-husband Kordell Stewart, as well as painkillers following her recent breast augmentation – and they did not mix well with her beverage of choice.

“She is very unstable,” the source alleged. “She’s been taking medications and mixing it with alcohol.”

And it ended in one of the most notorious housewives brawls ever.

After beating Moore, 43, and pulling her hair, hysterical Williams, 31, screamed to the other housewives, “I can’t believe I did that! I have embarrassed myself!”

Leakes was seen sitting on top of Williams and held her hand over her co-star’s mouth to subdue her.

“Kenya was a target from the beginning because all the ladies are jealous of her,” the source claimed. “Nene coached Porsha into being violent toward Kenya to save her job because it was widely reported that she was going to be fired.”

During the reunion, Cohen told Williams to go home and take care of herself instead of completing the rest of the reunion taping.

“Bravo knows that she is now nothing but a liability,” the source added. “Her attack on Kenya failed, and she lost her mind. It’s all very sad.”