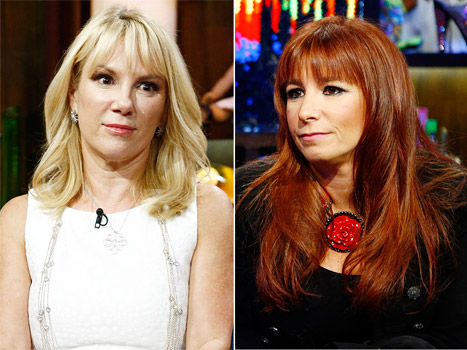 via US Magazine:
Ramona Singer has received some well-wishes from fellow Real Housewives stars following the news of her split from husband Mario, but there is one costar she doesn’t want to hear from: Jill Zarin.

On Monday, Jan. 27, the New York Post’s Page Six first reported and Us Weekly confirmed that Real Housewives of New York City star Singer and Mario had separated, and recently got into a domestic dispute at their shared Hamptons home. Zarin, who was fired from RHONYC in 2011, commented on the report on Twitter.

“I am glad you finally told the truth @ramonasinger,” she tweeted Monday. “I hope he gets what he deserves. Mario CHOKED her.”

Singer retweeted one commenter’s harsh reply to Zarin’s comment. “Why in the hell is @jillZarin discussing anything at all about @ramonasinger?” the fan asked. “STFU Jill. You nor your gossip are relevant.”

Singer, 56, then tweeted herself: “Think it’s sad she feels the need to use my personal business to try to make herself relevant.”

Zarin’s bitter exit from the Real Housewives in 2011 followed many falling-outs with costars, including former BFF Singer. “It felt like my funeral. I was heartbroken. . . ” Zarin told Bravo’s Andy Cohen in October 2012. “You can’t replace me! You can try, but you know you can’t replace me.”

Singer has starred on the reality series since it premiered in 2008. Page Six reported on Jan. 29 that Singer filed for divorce from Mario, 60, after 27 years of marriage. “It is like war of the roses between them right now,” an insider told Us of the couple, who share daughter Avery.

Singer tweeted Thursday: “Thank you all for the love & support! For my daughter’s sake, I would appreciate everyone respecting our privacy during this difficult time.”