On tonight’s Real Housewives Of Atlanta – “Jamaican Beef Catty” the ladies and their husbands are in Jamaica for a couples retreat.

Cynthia Bailey and husband Peter Thomas invite all the couples to Jamaica for a retreat, where we know Nene Leakes and husband Gregg make an appearance later. Phaedra Parks and Porsha Williams both came alone, and Kim brought not only her husband but her children and nanny as well. Sheree Whitfield was there with her ex-husband Bob Whitfield. Kandi missed the trip as she couldn’t travel overseas due to her late stage pregnancy.

Cynthia decides to let Kim take the helm solo on the commercial for her sunglasses. Peter warned her, Kenya “might hate on that a little bit,” but Cynthia thought all would be ok. Ok cynthia.

During drinks later, Cynthia let’s Kenya and everyone know, “To make a long story short, I’m a little pressed for time. Kenya was not able to make the creative meeting, so I was still able to have my meeting with Kim. I loved everything she pitched.”

Phaedra asked, “So you’re kicking your friend to the curb?”

Kenya forgetting that she missed the pitch meeting and didn’t even cancel graciously said. Kenya seem very hurt that her ideas weren’t heard especially when she didn’t reschedule and it appears she thinks Cynthia owes her anything.

Cynthia decides to have a private meeting with Kenya and Kim later.

“I wasn’t available to make the pitch meeting, but I could have had a conversation with you easily after that. I said I would be willing to work with Kim and now you’re telling me you already made a decision. I don’t appreciate that. No one typically makes a decision without hearing multiple pitches. That’s a respectful thing.” “

Cynthia responded that Kenya was not professional, which she was not. Kenya didn’t even apologize for not turning up or cancelling on time. Then Kenya turned to Kim, “You’re trying to alienate me from one of my best friends!” What? 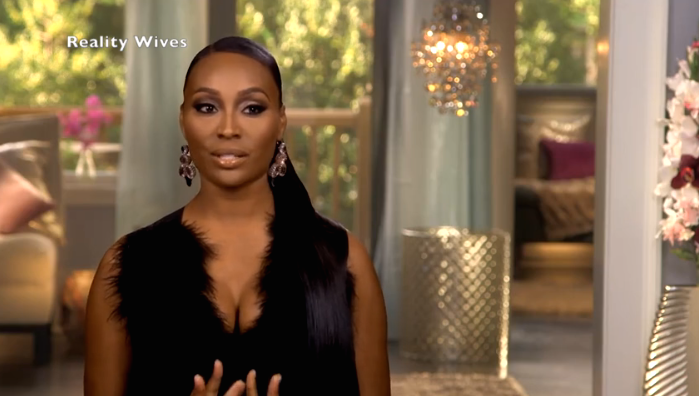 Kim let’s Kenya know, no one likes her, Kenya responds everyone love her. Ok hon lol.

Kenya: "Everyone loves me" #RHOA pic.twitter.com/H0Dm9NK4vN

Kim finally decides to leave the table. Kenya ‘helps’ her buy pulling out her chair, following her and waving her off. Kenya is crazy and childish. Kim retells what happens to her husband and she is livid her husband get’s excited too discussing the mess that is Kenya.

Kim: "I still have my Jesus with me, you're not going to knock a b*tch upside my head. F*ck" #RHOA pic.twitter.com/pWJhk36dUP

During the group dinner, Gregg and Nene make their appearance. Kenya seemed to be upset about it. Peter tries to get Kenya and Kim to talk out their issues which was a bad idea,

Kenya responds, “I would rather take a spoon off the table and gouge my eyes out one at a time than talk about this,” Kenya declared. At this time, everyone is looking for a spoon.

Kenya claimed she was bored and headed back to her room with boyfriend Matt, while the groups continues to talk about the situation.

I would have had more respect for Kenya if Kenya has said she was hurt Cynthia went with Kim’s idea, or felt left out. But that chair pull was plain wrong.

Kim’s husband Christopher stated that Kenya’s feelings were hurt. It was said that Kenya and Cynthia were BFF. Everyone questions Cynthia, to which Cynthia responded, “Kenya and I are still getting to know each other, but no, you don’t just wake up and you’re BFFs overnight.” Left out in the cold again, Kenya.

Sheree relays the information back to Kenya about the BFF situation, “Would you consider Cynthia one of your best friends?” Kenya answered yes, Sheree let her know about the conversation.

Peter had Cynthia’s sister, Malorie Bailey Massie surprise her in Jamaica. Kenya wanting to sort out the friendship debacle wanted to talk to Cynthia privately. Cynthia stated that they were very close and their friendship was “evolving.”

Kenya in her confessional ended with, “We’ll see how far you get when Nene leaves again and stabs you from the front this time.”

More in Real Housewives Of Atlanta, Reality Television (1350 of 3036 articles)