On this episode of the Real Housewives Of Atlanta, Cynthia with ex-boyfriend actor Leon Robinson interview a tutor for their daughter Noelle Robinson who wishes to become an actress. Cynthia voices her joy that the tutor is handsome. Leon questions her about her marriage and knows she’s not happy.

“Peter and I definitely have been having some issues. It’s finally gotten to a point now where I just really, honestly, pretty much checked out on the situation.”

Leon responds, “You know, better than I, that you’ve walked away from more relationships than you’ve stayed in. This relationship is a little different because this time you got married. If you exhaust every other option and it’s not working for you, and it’s not working for him, then that’s when you part ways, but I think it’s worth fighting for. If you fight for it and you don’t win the fight, then you’re right. You walk away.”

Porsha Williams invited Kandi Burruss to watch her participate in some sort a charity run. Porsha was looking great and showing off her goodies. Porsha spoke to Kandi about the her relationship with Duke, “You know what it was like when you first started dating Todd Tucker.”

Porsha doesn’t quite understand that her party was a little over the top so soon in her relationship.

“When I first met you, you were in a marriage where we said things you thought we shouldn’t have said, but then at the end, you were like, ‘You guys were right about a lot of things’. Going forward you just need to be aware and not afraid to just ask.”

Porsha stated that her relationship was good and that when it isn’t good anymore, she’ll leave. Kandi doesn’t seem to believe her.

Kenya threw a party for her Kenya Moore Haircare. The location’s air conditioning wasn’t working and the even was too hot. Kenya brought along her date Euguene. Kandi left early as it was too hot for her. There was also no water available at the bar. Porsha’s friend Shamea Morton, guest of the housewives started to drink from the products on display as they were filled with water. Other followed suit.

Sheree was invited to the event and says, “I’m not totally sure I can really trust Kenya. I mean, she still wears colored contacts in 2015. They talked about me have a fashion launch without any fashion, well Kenya had a haircare event with no haircare products.”

Kenya stated that the gift bags actually included the real products, which were given to the guests.

Kenya isn’t happy and the event appears to be a flop according to the editing, “This is not the Kenya Moore experience that I want my guests to enjoy. She tried to turn the party around by making a short speech acknowledging the heat, but that didn’t seem to do it.”

Sheree and Kenya take a moment to talk in private. Kenya claims she didn’t have a problem with Sheree and was only repeating what she heard from the neighbors. Did Kenya go to visit her neighbors houses? She doesn’t live there as yet as the house isn’t finished, so why is she going to visit strangers?

Kenya says she can recommend a contractor to Sheree. How? Sheree’s house is in better shape and closer to completion that Kenya’s shell of a house is. 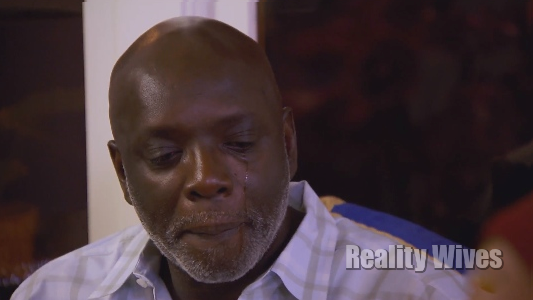 Cynthia states that she and Peter haven’t spoken in 10 days. Ten days! How can you not speak to your spouse for such a long period of time? The camera shows her calling a number on the phone with each time the call going to voicemail, “It doesn’t feel good to come home to an empty bed night after night.”

Peter finally comes home and they talk about their problems. Peter admitted he was tipsy at her eyewear launch party, after Cynthia said, “I felt like you acted completely inappropriately at the party.”

Peter thinks that their marital problems are from them putting work before their marriage. Cynthia says they suffer from a “disconnect”, plus the fact that Peter opened a bar in Charlotte in a different state.

Peter asked Cynthia, “when did you stop loving me?”

Cynthia responds, “I don’t know. It’s been a lot of different things. Sometimes I don’t even feel like we are compatible.”

Peter with tears rolling down his face says, “I never stopped being in love with you. I’m going to do everything I can. I am. I promise you.”

Cynthia says, “If it’s not working, we’re not going to be together. We’re going to go our separate ways.”

More in Real Housewives Of Atlanta, Reality Television (1583 of 3036 articles)