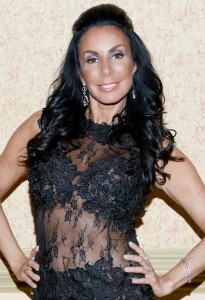 Former Real Housewives Of New Jersey star Danielle Staub is writing a tell-all book stating she is breaking her silence.

Born Beverly Ann Merrill on the 29th July, 1962, Danielle left RHONJ in 2010, she appeared on vh1’s Famous Food but has since left the public eye. Danielle revealed on Twitter on Thursday that she plans to write a tell-all book about how the reality show has affected her and her family.

The new tell-all would be Staub’s second book. Her first, released in 2010, ‘The Naked Truth

‘, was in response to Danielle’s criminal past and in Charles Kipps’s 1996 book
‘Cop Without a Badge: The Extraordinary Undercover Life of Kevin Maher

She says on instagram: “All I need to do is put out one tweet that I am writing a “tell all” and within ½ hour it has reached over a hundred thousand people and retweeted by even more. My in box filled with so many emails from social media giants asking me about first rights? Funny thing is, I walked away from the RHONJ over 6 years ago! Statistics show…yet to date I am still the most recognized more then any other housewife in the franchise. That’s not coming from me! It’s coming from the fans the press and yes the haters too, I have laid dormant for far to long and let others do the talking for me.”

“I have been taken advantage of due to this so called public figure/celebrity status more times that I care to mention. I have been labeled unspeakable things but out of respect for myself and especially MY TWO PRECIOUS GIRLS, never once did I fight back and defend my character because I felt people will form opinions on the person they think they know and how Bravo edited me. Oh if I could only pick up all the edited film from the cutting room floor we would have the best f****** reality show on that network. Yes I have made some bad decisions in my life 100% I’m not denying that but what people forget is that I am a human with feelings and I am also a mother of two beautiful girls that I would give my life for! What matters most to me is their respect. Nobody wants to read about what a great mom I am, an incredible provider and supporter and a cheer mom that bakes brownies, that wont sell books . Every body wants 15 minutes of fame but nobody wants to sacrifice an entire lifetime for it. Get ready because ..This is my story the unedited version and one that I should have told a long time ago!”

and, “The haters will hate and the doubter will doubt. Like a line from the God Father – “keep your friends close and your enemies closer” Lord knows I have my share. In a broad tweet that reached thousands the amount of positive feed back I had was incredible. Don’t concern yourself with who is publishing this book. After all I am to date the only one to be paid by Simon and Schuster PH to write my memoir I can assure you this….When I am done, you will understand this book is not about revenge in any shape size or form. There three sides to every story. Mine, yours and Bravo’s.”

The build up of what led up to many of MY infamous scenes and most quotable Moments will be defined in detail as if you are in the room with me ….I have no NDA!!! because aside from an “ORIGINAL CAST” partaking in one of the biggest franchises in TV history, I owe BRAVO NOTHING …It’s a two way street. The one thing I can assure you is this, when I am done every rock will be tossed and tables will be thrown, You all know how good I am at dodging them… (Come on a little humor) Laugh with me cry with me but don’t expect me to hold back because this is my story in detail I’ll take you there sit you next to me where it’ll be seen vividly through my eyes. Thank you to my true supporters and for all of your positive feed back… Now I ask YOU one IMPORTANT question….What is it you really want to know the TRUTH about? #Rhonj #original”.

Ok then, what are your thoughts? Will you be reading Danielle’s book. Post your comments below.