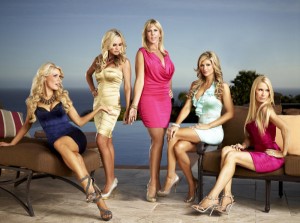 The OC ladies are back and started with a bang!

Tamra invites all the ladies to a shopping party in Ladera Ranch at her new boyfriends house, Eddie. The invite includes Gretchen. Tamra wants to mend the broken relationships including Gretchen, who is laughing in shock at the invite. If Tamra is being sincere I’m all for them making up. Tamra gets two tattoos removed, one of her soon to be ex-husbands name from her ring finger and a tattoo on her lower back that matched Simon’s shoulder tattoo. Say love with actions not tats. We are introduced to Fernanda Rocha a fitness instructor and friend of Tamra. Fernanda is a lesbian (did she appear on Showtime’s The Real L Word) with a smoking body!

Gretchen has developed a new handbag line, which is sold on her website GretchenChristine.com & ShopNBC.com. Gretchen is still miffed that Tamra didn’t come to her tupperware party last season. Rightfully so. Tamra wasn’t the nicest person to Gretchen last year. Gretchen thinks it’s fishy that Tamra is dating so quickly after Simon served her divorce papers.

Tamra & Gretchen are alike in many ways. Wasn’t Tamra accusing Gretchen of something similar with Jay Photoglou last season?

Vicki will not be buying from the GC collection. She wears Prada, Chanel etc. Vicki is still married at this point to Donn, she says they are happy. She later files for divorce.

Alexis our favorite holy roller is back! She & Gretchen are now bff’s. Alexis calls Tamra a princess as she is not married and doesn’t have to worry about children and a husband. Gretchen on her way to wasted town takes great offense to this and is upset. Alexis you can call me a princess any time!!

Gretchen picks out an evil eye item for Tamra, Tamra is shocked. Come on Tamra, you knew something was going to happen. The hatchet is alive and well and not buried. Gretchen grew some balls but at the wrong time. Gretchen cannot handle her liquor. Vicki tells Tamra to pick up her balls and kick Gretchen out as she was disrespectful to the host.

Gretchen is tipsy. Gretchen then tells Tamra, she is an evil b*tch. Gretchen was rude and out of place. If you have such feelings of animosity towards Tamra, why did you go to the party? Tamra knowing your history with Gretchen next time you will do better, I understand you’re trying to extend the olive branch, that is mature of you. May be a phone chat will be enough for the both of you.

Next week
Shameless in Seattle – Vicki travels to Seattle for a conference, with her daughter tagging along. Meanwhile, Gretchen grows uncertain about taking her relationship with Slade to the next level, and a competitive edge develops between Alexis and her gal pal Peggy.

Note:
Tamra stated on WWHL that she & Peggy were roofied. I am disgusted that a so called fan would do something so evil. Who knows if there could have been a reaction to the drug. Who ever you are get help, you are a sad and wicked individual. I am just glad Vicki and others were there to help Tamra & Peggy.

Disclaimer:
My blogs and tweets are written with sarcasm about what I think and observe. I may say things that seem harsh, but I love all the Real Housewives, every single one. I post about the characters they play on reality tv. Nothing more nothing less. I do not know them personally, I am sure they are quite different in real life.

More in Real Housewives Of Orange County (300 of 361 articles)