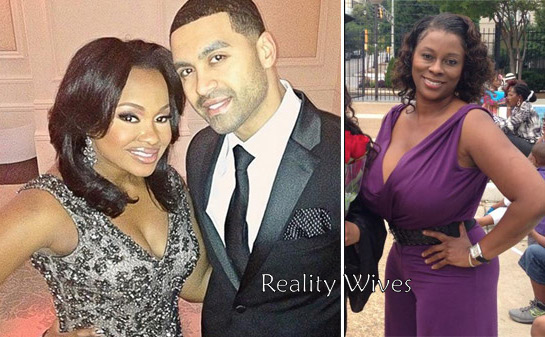 Gayla St. Julien the self professed “right hand b*tch” of Real Housewives Of Atlanta star, Apollo Nida was recently sentenced to 5 years in prison after being found guilty of ID theft, mail fraud etc,. Somehow she wrote a letter or sanctioned this statement which was released by her family.

A Personal Statement from Gayla St.Julien

To all the people who hide behind keyboards with negative comments and opinions. To the individuals who know nothing of my life or struggles. Apollo sat in the back of Judge Pannells’ court room the look of fear on his face awaiting my fate which will soon be his fate. As of April 23, 2014 was a day of new beginnings for me I took full responsibility for my actions.

I DID NOT testify against Apollo. Eight months ago I did assist the secret service in only holding Apollo accountable for his part in the crimes. Apollo and I have a very long history together we often referred to each other as best friends. I protected, kept Apollo secrets, covered up lots of affairs and when his mother lay fighting the battle against AIDS at St. Saint Joseph hospital I was the one he called. We cried together and prayed together Apollo made a promise to me that he would support me if the inevitable ever happened. Two weeks prior to the inevitable happening I was made aware of my arrest I went to him and he abandoned me. With a husband and children I faced this head on I wasn’t going to run.

On that faithful day I already knew I was on my own. I had been with Apollo when Phaedra told him to leave Joe Flowers once he was arrested. The only reason Apollo kept him close was because Joe Flowers knew about Onyxo Collections. On September 11, 2013 I simply chose my life and family over Apollo. While Apollo cooperated with the secret service Apollo had the audacity to imply that my husband of 3 months was somehow involved in our crimes. Nothing could be further from the truth. APOLLO IF YOU READ THIS I KEPT YOUR WIFE OUT OF THIS SOMEONE HAS TO STAY AND CARE FOR THE CHILDREN LET’S LEAVE IT AT THAT!!!!!!!!

Apollo has taught me that I have no friends and to all of the hustlers that think you are as Apollo use to say, “On a winning team” As the old classics say, ” There Is No Honor Amongst Thieves” I learned the hard way.If by this you mean to call me a snitch then so be it. I went from 210 months to 61 months I can live with that. And for the record my husband is poor nor broke. As for Angela Stanton while I never disrespect the struggle of another woman I believe she has suffered a great deal I don’t believe her book to be accurate. As it pertains to Everett, Phaedra, or Apollo “Everybody knows Phaedra is no mastermind” don’t get me wrong Phaedra is not innocent but she ain’t no mastermind, everybody knows why Apollo married Phaedra. So if you are curious to know the truth about, deception, betrayal of an Atlanta Housewives’ couple then be sure to look for “Double life Of A Church Girl Memoirs Of Female Hustler” coming soon.

To my children I love you all Mama will be home soon.