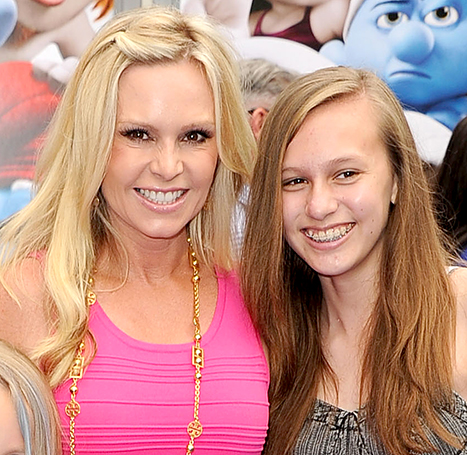 Tamra Judge’s estranged daughter Sidney Barney went on Facebook and posted her disappointment on Thursday 22nd, October, after her mother emotional appearance on part one of the Real Housewives Of Orange County’s reunion earlier this week.

The teen, has lived with her father, Simon Barney, for the past two years, accused Tamra of, being embarrassing, mentally and verbally abusive.

The reason I do not live with my mother is not because of my dad, it is because she is mentally/verbally abusive and not a mother to me. When I told my mother that I didn’t want to live with her anymore I asked only a few things from her. For the past two years I’ve been asking her to stop treating me badly, to stop doing embarrassing and talking about me on the show, and to not use my siblings and I as storylines. Clearly she hasn’t followed through with anything that would have made me go back to her house.

If she really wanted me back in her life she would have taken responsibility and changed two years ago when I told the first time what was causing out relationship to suffer. Obviously, I am just another storyline that feeds her fame and wallet. Now you’re using Spencer as a storyline, I hope he realizes it before the damage is done.” 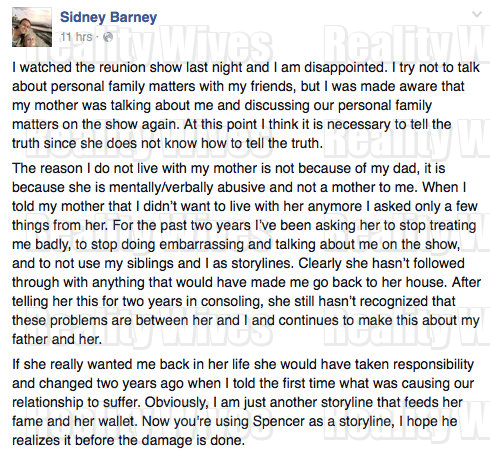 Tamra’s carefully orchestrated separation and divorce from Sidney’s father, Simon was well documented on RHOOC’s fifth-season and their ongoing divorce and child custody proceedings made headlines until it was finalized a year later. Simon has full custody of Sidney, but shares joint custody of son Spencer, 15, and daughter Sophia, 9.

Tamra, has tried to reach out to her daughter via social media. In addition to posting on twitter, the thrice married, reality star shared a cryptic picture on Instagram earlier this week.

“It’s so unbelievably hard. i still don’t know if sharing it was the right thing to do, I’ve been in tears all day. I just want my Daughter back. Please God please bring her back to me. I love you So much Sidney,” Tamra wrote.

In response to the facebook post, Tamra told US Magazine: “It’s shocking and horrifying that someone would do something so vile. I knew it wasn’t my daughter. Those are not words of a 17-year-old and that was not my daughter’s real Facebook page. It’s very apparent who was behind it; no need to name names. Shame on you for trying to make a sad situation worse between a mother and daughter.”

More in Real Housewives Of Orange County (104 of 361 articles)