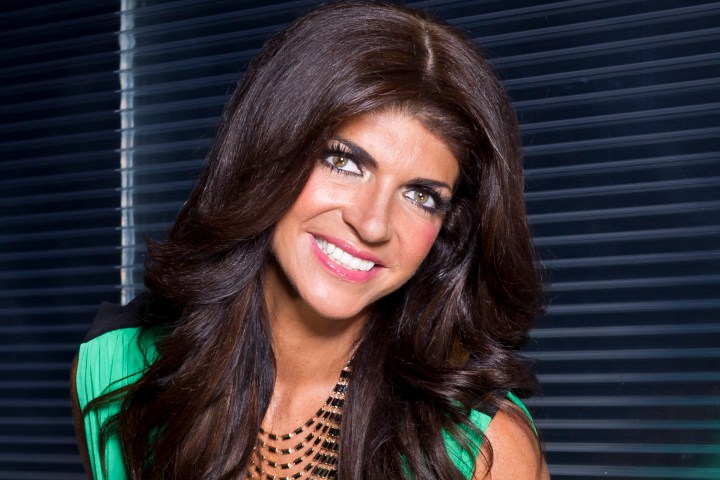 The bizarre antics of a few loud-mouthed Jersey housewives did not prepare Teresa Giudice for the Real Inmates Of Danbury and their surreal world.

Teresa details her stay at the famous prison, which includes disgusting bathrooms, maggots in the food, a lot of esbian sex, humiliating strip and hair pulling fights.

The 43-year-old reality show veteran recounts the lurid details of her 12 months behind bars in the new book “Turning The Tables: From Housewife to Inmate and Back Again.

Inside the Federal Correctional Institute in Danbury, Conn., Giudice was known to the warden as Inmate No. 65703-050 — and to fellow inmates as “Hollywood.”

Her introduction to prison life was harsh, with Giudice forced to surrender her rhinestone-studded jacket and leggings for a strip search. Naked and sick to her stomach, she was ordered to squat, stick out her tongue and cough.

“I wanted to die,” she writes.

Day two wasn’t much better. The mother of four girls recounts the unexpected sounds and scents of nocturnal canoodling arising from two of her five roommates.

Giudice had just said her nightly prayers, made the sign of the cross, and was falling asleep when she heard a “muffled sound” through the stillness.

“I could see two women … writhing around … I cannot believe this is happening!” she writes.

But it happened again and again so much that her prison residence became known as “The Boom Boom Room.”

And that’s just the tip of the prison sex iceberg. The suburban housewife recalls straight inmates who became “gay for the stay” behind bars, unsettling shower escapades and prisoners selling their bodies for commissary money.

Teresa steered clear of jailhouse romance, but found herself fantasizing about her husband (and co-defendant) Joe.

On one family visit, she whispered into his ear about some naughty new sex tricks shared by her inmate pals. On Father’s Day, she sent him a card with three pages of new sexual positions.

“Madonna mia , I was dreaming of my husband,” she declares.

Teresa, 43, was one of the original cast members when the Jersey edition of the Bravo show debuted in 2009. The prison drama frequently reminded her of reality television in ways both good and bad.

Her cable television notoriety followed her to Danbury, where other inmates sold stories about her to the tabloids. She said she read the magazines religiously in prison, keeping up with everything written about her.

And Giudice was once summoned for a strip search, with her room tossed by correction officers, after another inmate claimed she was hiding a cell phone.

There was no phone, just embarrassment and inconvenience.

Some of her fellow prisoners were starstruck by her presence in the prison. Prior to Giudice’s arrival, Danbury’s last celebrity inmate was former Fugees singer Lauryn Hill on an income tax rap.

There were a few menacing stares among the smiles of her prison devotees, Giudice recalls. There was also a lot of fan mail, including letters from male inmates across the country looking for a prison pen pal.

She eventually tapped into the prison’s surreptitious spa services, finding the inmates who would do her nails, give massages and style her hair. The prison seamstress, for a few extra bucks, specially tailored her jailhouse ensembles.

And she found some bargains at the prison commissary, including sunglasses for $5.20.

Co-writer K.C. Baker, a veteran of People magazine, perfectly captures Teresa’s oft-whiny voice in the 261-page book — much of it drawn from Giudice’s prison diary.

She began writing everything down after arriving in Danbury on Jan. 5, 2015. Giudice writes that she had to hide the diary from other inmates who viewed its contents as nothing more than a lucrative payday.

Giudice and her husband Joe pleaded guilty in March 2014 to conspiracy and bankruptcy fraud charges for financing their high-flying lifestyle with $5 million in bogus mortgage and construction loans.

There were a couple of unexpected bonuses from her jail stretch. She became a workout warrior, exercising up to six hours a day, and a voracious reader.

A particular favorite was “The Secret

,” the best-selling New Age self-help book. Giudice said she was inspired to create her own “vision board” with images taken from magazines and her own hand-written notes.

Among her vapid wishes for the future: Earning $40 million to “take care of my girls and help needy children,” making her own yoga DVD and a Florida beachhouse.

Giudice was released on the 3rd, returning to her Montville, N.J., home, where a $90,000 Lexus, a gift from her husband, was parked in the driveway.

The housewife writes that one of the things she was most looked forward to was swapping her prison-issued “Granny” underwear for a thong and her leopard skin pajamas.

Spouse Joe Giudice is due to start his own 41-month prison term in two months. The Italian-born Giudice could also face deportation upon his release from the federal lockup.

Teresa’s book hits stores on the 9th Feb, just 48 days after her release from prison and four days after the end of her stint under house arrest.