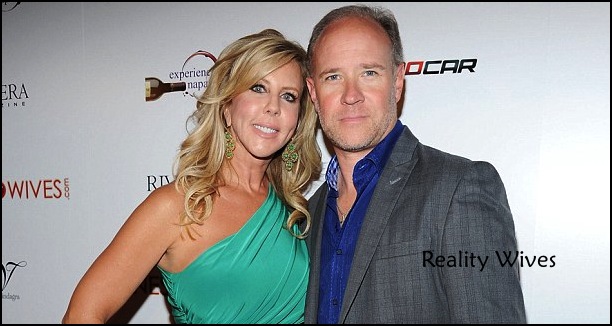 Vicki Gunvalson, is the only original housewife on the Real Housewives Of Orange County franchise.

On being the only RHOOC original
‘And I guess it’s because I’m just a glutton for punishment! I don’t know why I’ve lasted the distance, other than it’s because my life has been so eventful. I’ve raised children, become a grandmother, I have my own business and I’ve been through a divorce and that’s everyday life for a lot of people out there these days.’

On Alexis & Lydia leaving RHOOC
‘I’m sad about Alexis – she was very beautiful and good eye candy for the viewers, but Lydia [who recently quit the show after just one season] I never really knew.’

On what of Gretchen, who recently took to Twitter, implying that Vicki had bullied her?
‘I never bullied her, that’s just not true. And I’m glad she’s gone. She’s a troublemaker and 90 per cent of her stuff was fake. Actually, who knows if what she did was real or fake but my perception of her was that she just wasn’t authentic.’

More troubling perhaps for fans of Vicki – and indeed for her own family – is that despite the apparent break-up between Vicki and Brooks, she now reveals that they are in fact still together.

Brooks has come in for repeated criticism throughout their on-off relationship, not only regarding rumours that he was unfaithful to Vicky with a stripper-slash-porn star (which he denied), but in particular when secretly recorded audio tapes were released where he declared his plans to ‘f***ing beat [Vicki’s] ass’ and referred to his girlfriend as a ‘f***ing whore’ (Ayers subsequently apologised for his comments).

On her relationship with Brooks
‘We are still seeing each other from time to time. He lives in a different state – but he was wrongfully abused on the show, both by other cast members and my daughter [Briana]. They magnified the truth. I wouldn’t be with someone who didn’t treat me right, who didn’t treat me like a princess, and I don’t need to be protected,’ she says, adding: ‘I mean, I’m 51 – I’ve got this! We tried breaking up and it didn’t really work for us, but I’m just dating him – we’re not married or engaged – and dating someone is how you find out about them. I know my daughter worries, but she’s only met him four times and in any case, we each have our own lives to lead – we can’t lead anyone else’s life for them. Other people have their opinions but I really, really care for this man.’

On her marriage to Donn, she has ‘divorce remorse’
‘When you have a weak marriage to begin with and then it’s shown on air, then it doesn’t help. I was stretched so thin with work, my family, the show and I couldn’t let one of them go, but you either have a husband who supports you, or you don’t, so obviously that caused issues. I believe in marriage, so I regret the decisions we made to put in a wedge in that marriage, but I don’t regret our divorce. It’s been hard, but obviously, we weren’t meant to be together and at the end, it was more of a pain to be together than apart.’

More in Real Housewives Of Orange County (194 of 361 articles)