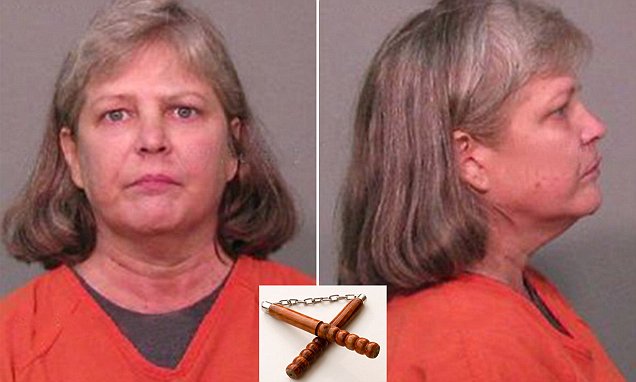 Sondra Earle Kelly & a set of nunchucks, (not the same set used in the assault)

A Rock Hill woman was charged with aggravated domestic violence after assaulting her husband with nunchucks, according to Rock Hill Police.

Officers responded to a domestic on the 1800 block of Springsteen Road about 8:30 p.m. Sunday, according to a police report. The victim had blood “all over him” when he answered the door, and officers saw the home was in disarray with blood on the walls. 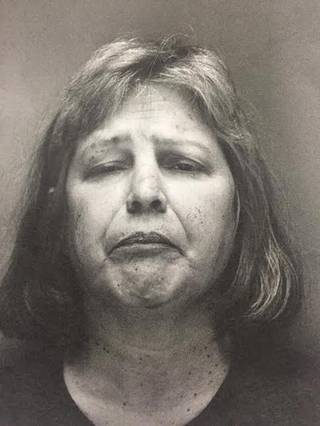 The victim said he was watching TV in the living room when Sondra Earle-Kelly, 51, “came in and asked him to go to bed with her,” the report states. Kelly, who had reportedly been taking Xanax that night, became irate when the victim said no, and began throwing ceramic figurines at him.

The victim told officers Kelly “kept coming at him, assaulting him with whatever she could pick up.” He showed officers wounds on his arms that appeared to be defensive in nature.

Kelly then picked up a pair of nunchucks and began hitting him, police said. The victim said she hit him several times in the face and head.

Kelly told officers she didn’t know how the apartment got into its condition or how the victim suffered his wounds.

The victim declined transportation to the hospital.

Kelly showed officers several lacerations on her abdomen that appeared to be self-inflicted, police said. Kelly was taken to the emergency room for treatment, and then to the Rock Hill city jail, where she was charged with criminal domestic violence of a high and aggravated nature.

Kelly was released from the York County Detention Center on Monday under $15,000 bond, according to jail records.