Cromwell High School freshman Andraya Yearwood finally ran the race she had been dreaming of running, and not because she had a personal best time.

Andraya is a transgender woman who was running for the girls' track team on Wednesday, racing other female athletes from Portland and Old Saybrook. After telling her father, Rahsaan Yearwood, and mother, Ngozi Nnaji, in middle school that she identified as a female, Andraya, 15, was getting the chance she wanted.

"I do hope I inspire people, but not only with track," Andraya said Wednesday. "I hope it inspires people to not hold yourself back just because you're scared of it or it is your first time doing it, or because of other people's negativity.

"I'm so happy and so excited to be doing this and so thankful for all of my support." 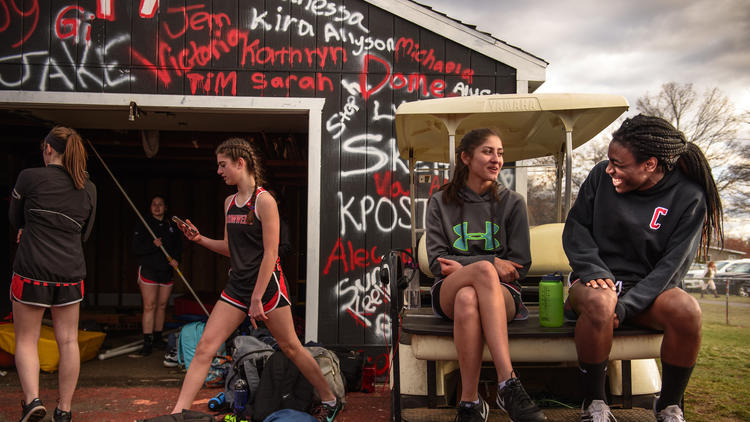 Cromwell High School freshman Andrea Yearwood (far right) jokes around with her best friend Sophia Ehsub during Yearwood's first track meet as a transgender female. "I definitely think she'll be an inspiration for people," the junior teammate Ehsub said. "I think Andraya is very brave and has lots of guts to go out in the world where it is not always supportive and positive." (Mark Mirko / Hartford Courant)


Officials from the Connecticut Interscholastic Athletic Conference, which governs sanctioned high school sports in the state, said Wednesday that they did not believe Andraya is the first transgender athlete to participate in a sanctioned sport, but the organization does not keep records.

"I definitely think she'll be an inspiration for people," said junior teammate and close friend Sophia Ehsub. "I think Andraya is very brave and has lots of guts to go out in the world where it is not always supportive and positive.

"She loves who she is and embraces it and is happy with who she is — and I think everybody should get their chance to do that."

In middle school, Andraya ran for the boys track team. But before starting at Cromwell High as a freshman, her family met with school officials. Andraya wanted to participate with other girls. The school district, which had supported Andraya's transition in middle school, determined that she was eligible to participate on the girls' team. 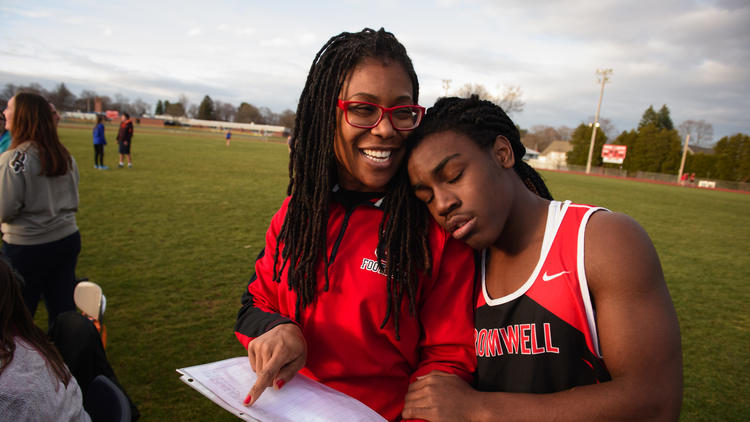 Andrea Yearwood rests on her mother's arm after winning the 200 meter dash during her first track meet as a transgender female. "For me," said Yearwood's mother, Ngozi Nnaji, "The decision to be supportive was easy because she can be whoever she wants to be. But what she won't be is suicidal. She won't be an addict. She won't be dependent on other ways to make her feel good. She needs to be herself. And if that means I support her in her transition to a transgender female, then that's what I do as a parent." (Mark Mirko / Hartford Courant)


In the fall, she was a member of the cheerleading team.

"Once we identified that she was transgender, a weight lifted off her shoulders," her mother said. "She's been engaging in so many different things and so confident about what she is doing that she is almost a totally different person. And that's what you want to see as a parent: a child that is confident and loves herself."

Andraya's times in the 100 and the 200 are fast. A year ago, her 11.99 in the 100 would have won the Class M title and put her second at the State Open, .01 seconds behind the winning time. And Andraya ran Wednesday in cold conditions, and without starting blocks. She is expected to get faster.

"I know they'll say it is unfair and not right, but my counter to that is: Why not?" her mother said. "She is competing and practicing and giving her all and performing and excelling based on her skills. Let that be enough. Let her do that, and be proud of that."

The CIAC defers to the determination of the student and his or her local school regarding gender identification. According the CIAC handbook, it is fundamentally unjust and contrary to applicable state and federal law to preclude a student from participation on a gender specific sports team that is consistent with the public gender identity of that student.

With her father, Rahsaan Yearwood, photographing from the sideline Cromwell High School freshman Andrea Yearwood wins the 200 meter dash during her first track meet as a transgender female. In middle school, Yearwood ran with the boys but, her father said, â€œIf she won the nationals in the boys, she wouldnâ€™t be as happy as coming in 15th in a local meet with the girls and that says everything about why she is running on the girls team and not the boys." Yearwood won the 200 in 26.34 seconds. (Mark Mirko / Hartford Courant)


Before the meet, Old Saybrook and Portland were notified of Andraya's participation and didn't raise any issues. Andraya, who has access to the female locker room but changes privately, said she felt welcome on the track by both her teammates and opponents.

Brian Calhoun, who coaches the Cromwell boys and girls track teams with Thomas Saunders, said Andraya's participation has never been an issue with the team. 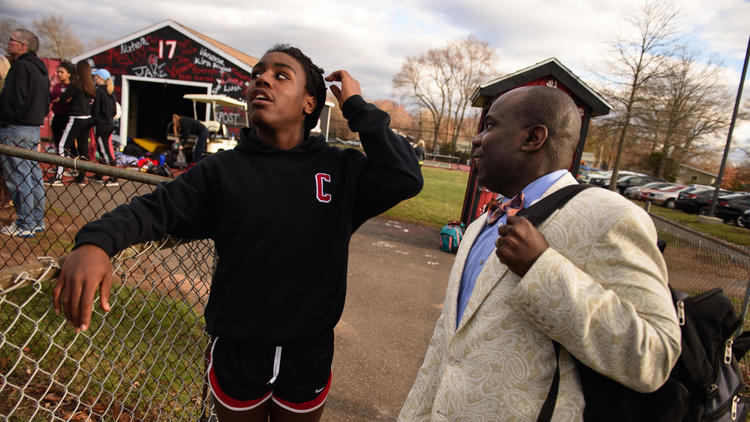 Cromwell High School freshman Andrea Yearwood talks with her father Rahsaan Yearwood after running in her first track meet as a transgender female. In middle school, Yearwood ran with the boys but, her father said, â€œIf she won the nationals in the boys, she wouldnâ€™t be as happy as coming in 15th in a local meet with the girls and that says everything about why she is running on the girls team and not the boys." (Mark Mirko / Hartford Courant)


In Texas and Alaska, similar stories have drawn public attention in the past 12 months. A transgender male high school wrestler in Texas had to compete in the girls tournament in February because of a state high school rule that requires athletes to compete as the gender listed on their birth certificates. He won the tournament but had said he wanted to wrestle against boys. In Alaska in June, a high school transgender female track athlete competed in the girls state championships.

On Wednesday, Andraya said she finally felt in the right place, running the right race.

"I didn't want to live my whole life hiding myself from my family and other people," she said.

Her father, a former college football player, took pictures and video, and watched from the fence bordering the track. Her mother, wearing a bright red Cromwell jacket, greeted her with hugs after each race and gave her pep talks. Her best friend, Sophia, was there to calm her down when her nerves got to be too much. And, for the first time at a track meet, Andraya sprinted toward the finish line and heard the name she chose for herself being cheered by the community that has embraced her and support of her.

"It was heartwarming and pretty exciting to see that other people were using [my name]," Andraya said. "This being my first meet as a transgender woman at the school, to me it felt like there was a little extra pressure to show my best and not let everyone down."

She finished the day with a smile on her face, proud of where she had come from and where she was headed. Moving forward, Andraya will start the long process toward sex reassignment surgery. She will next begin by taking puberty blockers and, later, hormone blockers.

"[Wednesday] is just one example of someone choosing their path and finding a way," her father said. "I think if other folks in other situations see this story [they might] say my choice may not be a popular one, but it is my choice, and it is the one I want to live with."

This young man has a mustache and is declaring himself to be a girl? While running as a girl. This is BS!
His parents have failed him. Sticking some dodo braids in your hair does not a girl make.
Everyone is ignoring the signs of mental illness and allowing this travesty to continue.
He is a boy, and should not be allowed to run against girls unless it's a mixed race. this is madness!
0
Show post links
Top