Tomorrow is National Prevent Teen Pregnancy Awareness Day! So it is totally fitting that a new episode of MTV’s 16 and Pregnant was on tonight. Tonight we meet Myranda Trevino. From the beginning we see how mature Myranda is although she is pregnant at 17. She has an alcoholic mother who 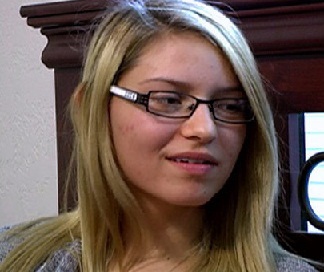 allowed Myranda to move in with her boyfriend and his grandma after six months of dating and while three months pregnant. Yes, you read that right. After only three months of dating, Myranda got pregnant. Within the first ten minutes of airing, she is shown saying that her mother will not be allowed to babysit because of her problems and issues and because Myranda doesn’t want her children to be surrounded by that and that she has been begging her mom to get help since she was twelve years old.

Myranda’s boyfriend works at the dollar store and is saving up money. He already has $700 saved up! While this doesn’t sound like a lot especially with a baby coming soon, it is very mature and responsible of him to be working and saving up. This season we haven’t seen many baby’s fathers stepping up to the plate.

How cute is this nanny? She continuously checks in on the two to make sure they aren’t messing around. She starts lecturing Myranda and Eric about not using birth control. She yells at Eric for not using condoms and Myranda for not getting her birth control after it ran out. She then says that it is not “Grandma Day Care” and that the two can not live in her house anymore once the baby comes because she has “been there, done that.” While I can understand why she might not want to have to take care of the baby, it’s a little harsh to tell the two they can’t live there any longer. But, it’s not as horrible as I thought when the two find a place to live on Nanny’s property. Unfortunately, the place needs A LOT of work. Luckily, Nanny is willing to help after giving her two cents that the two had better “grow up fast.”

We cut to a scene of Eric and Myranda getting an ultrasound of their beautiful baby girl and they are holding hands! I can’t even get over how adorable these two are together. They treat each other with respect, spend time together, and love each other. Nanny asks Myranda if she wishes her mother was there, and she replies no. I can’t imagine how sad it must be to be pregnant at seventeen and not have the support of your own mother. Atleast Myranda has the love and support of Nanny and Eric.

At Myranda’s baby shower we learn that her mother just got out of rehab. She sits with Myranda and tells her that it is no secret that she’s struggled with alcoholism and drug addiction her entire life. She also tells of her plans to enter an intensive outpatient drug rehab program where she will attend three days a week. She says she’s committed to getting better so she can be in her grandbaby’s life. She then finishes the conversation by saying that she “knows” Myranda will allow her to be in the delivery room because she thinks just her and Eric should be there. Myranda ultimately decides to not allow her mother in the delivery room because the doctor told her she could only have two people. She opts for Eric and her best friend and I can’t say I blame her.

When Myranda tells her mom she doesn’t want her in the delivery room emotions run high. Her mom then asks if she can watch the baby and Myranda tells her she doesn’t know because of past memories and events. Her mom begins to cry and tells Myranda that it will get better, she promises. I hurt for Myranda watching this and all I wanted was for her mom to hug her.

After fourteen hours of labor, Myranda opts for an epidural and shortly afterwards begins pushing. After a few pushes, beautiful baby Kaylee Michelle is born. Both mom and dad share a kiss and take their first family photo. Eric’s mother’s name is Michelle, and she visits baby Kaylee at her house after the family returns home from the hospital. Everyone is there to visit but Myranda’s mom is noticeably missing because Myranda isn’t ready for her mother to be around Kaylee.

At the end of the day, Myranda and Eric have an incredibly strong relationship for being so young. Despite Myranda’s hard childhood she is a great mother who only wants what is best for her daughter. Addiction is a disease that affects everyone involved. It is a great sign that Myranda’s mother went to rehab and got the help she needed and I hope that she continues to be sober and work on their relationship. Myranda and Eric have big plans. She has begun studying for her GED and Eric plans on taking college courses at a local community college. Myranda also wants to do online courses for the baby’s first year. My fingers are crossed that the two complete all their goals and continue to support one another and be wonderful parents to baby Kaylee.

If you or someone you know has a substance abuse problem and wants help: National Alcohol and Substance Abuse Information Center: (800) 784-6776.