On this new episode of 16 and Pregnant, we meet Sarah Roberts. Sarah had high hopes and dreams. She wanted to go to college and start a career in journalism. Her boyfriend Blake plans on being a shrimp fisher, never graduated high school, and doesn’t have a relationship with his family. Despite Sarah’s mother not liking Blake, she allowed him to move in so he had a place to stay.

Sarah talks about how she struggled with morning sickness during her pregnancy. We see Sarah go to her OB/GYN and this doctor really cares. She asks about Sarah’s school plans, urges her to go to college, and tells Blake he should get his GED ASAP.

Instead of getting the crib for the baby, Blake ditches Sarah and goes out with friends. So Sarah writes him a “to do list” and he groans and moans. I love the relationship Sarah and her mom have. Side note: Can we discuss how amazing Sarah’s mom looks? So young!

Blake and Sarah get into a fight where Blake says he isn’t in a relationship with Sarah’s mom so he shouldn’t have to hear it from her. Maybe he forgot he lives in her house and doesn’t pay for rent, food, utilities, etc. He then says he’s going to move elsewhere with his “$150 pay check.” Newsflash: that is just barely going to cover only the diapers.

I’m sorry but did Blake really call Sarah a “bitch?” I can’t get enough of this mother daughter relationship and how Sarah’s mom sticks up for her. Telling Blake she doesn’t approve of him being disrespectful to her daughter and then telling him to leave.

Blake doesn’t call Sarah for a couple days before showing up with “tater chips” and telling her he’s sorry. Sarah is willing to try one more time for the baby and the two try and work on their relationship. 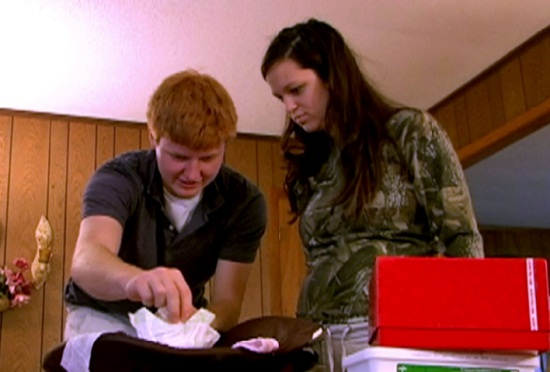 Because the baby’s head was positioned too far to the side, Sarah was told that she needed a C-Section. Unlike last week’s episode, MTV doesn’t show everything this time. So we meet little baby Tinsleigh. What a pretty baby girl.

Despite their past differences, Blake gets a full time job at a grocery store to make money. But all he does during the day is sleep before his next shift. He never gets up for the baby and Sarah is left to pull the 24/7 job of being a mom alone.

Eventually it becomes too much for Blake who decides to leave and not be in his daughter’s life. Very, very sad but I know that Sarah is all the love her baby needs. Good luck Sarah we’re rooting for you!