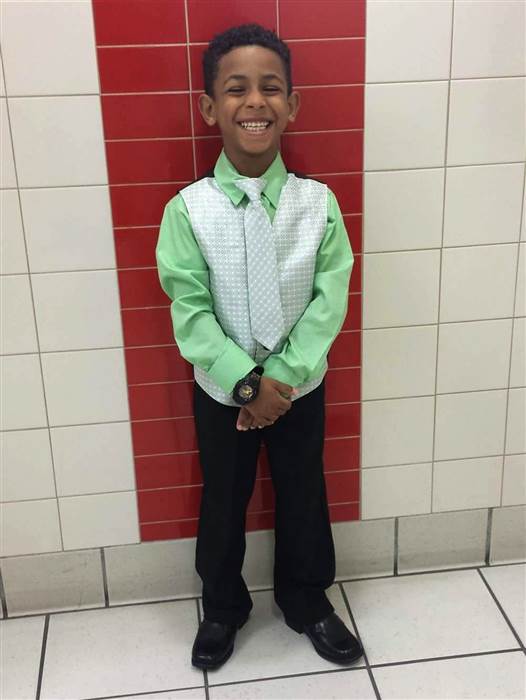 A security camera video taken inside a Cincinnati elementary school reveals that a student assaulted an 8-year-old boy in a restroom and other children may have kicked and struck the boy for 5 minutes while he lay unconscious.

In a report obtained by The Cincinnati Enquirer, a Cincinnati Police homicide detective describes the Jan. 24 Carson Elementary School video’s content: “I witnessed behavior that in my belief is bullying and could even rise to the level of criminal assault” if not for the young ages of the perpetrators.

School officials did not tell Gabriel’s mother about the assault or that he had lost consciousness, only that the boy had fainted, said Jennifer Branch, a lawyer for the boy’s mother. Gabriel’s mother has agreed to identify her child publicly but did not wish to release her own name.

Carson Elementary officials are not commenting on the video or the assault, but a Cincinnati Public Schools statement took issue with the detective’s characterization of multiple students beating Gabriel. School system officials said the video does not support that description and said they would release a version of the surveillance video, possibly by Friday, altered to blur the faces of the children to protect their identities.

Gabriel died Jan. 26, the first youth suicide in 2017 in Hamilton County, where Cincinnati is the largest city. Seven county residents 18 and younger have died in suicides so far this year.

Last year, 13 occurred. The yearly average is about five.

School spokeswoman Janet Walsh declined to answer any other questions about the situation. Walsh previously has said Carson Elementary had zero reports of bullying in the August-December term.

In January, Cincinnati Public Schools reported that the number of bullying incidents had declined systemwide:

Eric Karaguleff, a veteran Cincinnati homicide detective, wrote a Feb. 3 email, about a week after the boy’s death, to Jeff McKenzie, Carson’s assistant principal. Carson principal Ruthenia Jackson and three other Cincinnati Public Schools officials were copied on the message.

The detective reported that the security-camera video was taken over the noon hour of Jan. 24 and focuses on a restroom entrance. Karaguleff viewed the video Feb. 1, six days after the 8-year-old boy’s death, and said he found it alarming.

“I saw some concerning events, and I don’t even have a child at that school,” Karaguleff wrote.

Karaguleff composed a timeline for 18 minutes of video. Eleven minutes in, a boy enters the restroom, wearing a red and gray coat “with dyed hair sorta O’Dell Beckham Jr. style,” in the manner of the professional football player.

Six seconds later, kids flee the restroom. The boy in the red and gray coat hits another boy in the stomach, “sending him to the floor in all fours.”

The assailant then threatens another boy.

Then Gabriel arrives “and appears to shake hands.” The boy in the red and gray coat yanks him to the ground and “appears to celebrate and rejoice in his behavior” as the victim lay motionless.

For nearly 5 minutes after that, “many students step over, point, mock, nudge, kick, etc.,” the 8-year-old boy, Karaguleff wrote. Finally, McKenzie rushes into the restroom and finds the boy.

“While we are concerned about the length of time that Gabriel lay motionless and the lack of adult supervision at the scene, when school administrators became aware of the situation they immediately followed protocol by calling the school nurse to evaluate Gabriel,” according to a Cincinnati Public Schools statement.

“The school nurse checked Gabriel’s vital signs, which were normal,” according to the statement. “She also contacted Gabriel’s mother and asked her to pick him up and take him to the hospital to be checked out,” which Branch said no school official mentioned to Gabriel’s mom.

The detective’s report said the school staff could best handle the issue, but he asked for the name and date of birth of the boy in the red and gray coat. This week, police spokesman Lt. Steve Saunders said the department concluded its investigation with no further action.

On the day of the assault, someone from Carson Elementary called the mother to say Gabriel fainted and was in the nurse’s office with normal vital signs, Branch said. The mother picked up her son and took him home.

Later in the evening, Gabriel became nauseous and vomited twice, and his mother took him to Cincinnati Children’s Hospital Medical Center. Branch said the boy only told his mother his stomach hurt, adding that the mother believes he did not know what had happened that day.

Cincinnati Children’s kept Gabriel until about 6 a.m. ET Jan. 25 and decided he was suffering from stomach flu, not knowing about his potential for a head injury, Branch said. Exhausted, Gabriel stayed home from school that day.

He did go to school Jan. 26 and came home. But around 5:30 p.m., he went to his bedroom, knotted a loop in his necktie and hung himself from his bunk bed.

Carson Elementary and school district officials did not tell the mother that Gabriel had been assaulted at school, Branch said.

“If the school had told her what had happened to him in the bathroom, that he was unconscious for such a long period of time, she would have taken him to the hospital immediately, reported that to the medical professionals, and she would have called police,” the lawyer said.

“That’s why this is so frustrating for her, not knowing what really happened in that school,” Branch said.