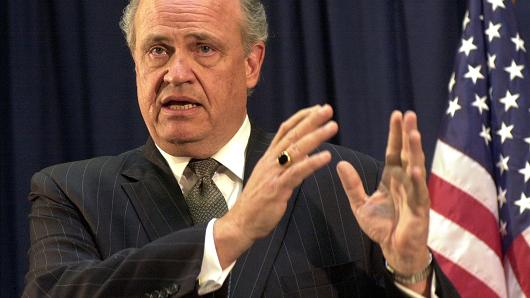 via NY Times:
Fred D. Thompson, a former United States senator, actor and Republican presidential candidate, died on Sunday in Nashville. He was 73.

The cause was a recurrence of lymphoma, his family said in a statement.

Mr. Thompson had an unusual career, moving back and forth between the worlds of national politics and mass-market entertainment. He left a regular role on the hit NBC drama “Law & Order” to run for president in 2008.

Mr. Thompson was known for playing authoritative characters on television, but was sometimes described as ambivalent in his political aspirations. He brought gravitas to the screen but sometimes struggled on the campaign trail, especially during his unsuccessful run for the Republican presidential nomination.

Mr. Thompson compiled a solidly conservative voting record in the Senate, though aides said he showed little enthusiasm for divisive battles over abortion and other issues that motivated the religious right. And many questioned his work ethic, both in Congress and as a candidate.

His ambivalence was evident in 2007, when he was asked by The National Review to name his most important accomplishments on Capitol Hill. “You mean besides leaving the Senate?” he replied.

Mr. Thompson began his life in public service as chief Republican counsel on the Watergate Committee, where his tough questioning of Alexander Butterfield, a former aide to President Richard M. Nixon, led to the revelation of recording devices in the Oval Office, a turning point in the investigation.

Mr. Thompson served eight years in the Senate before deciding to leave a safe Republican seat in 2002 for a role on “Law & Order,” where he played Arthur Branch, a Manhattan district attorney.

Mr. Thompson believed his biggest role was yet to come, however, and in 2007 he asked the producers of “Law & Order” to release him from his contract so he could explore a bid for the Republican presidential nomination.

His supporters hoped that his on-screen charisma and small-town roots could make him into a modern-day Ronald Reagan, another conservative actor turned politician, but it was not to be. Mr. Thompson’s campaign was often languid and failed to attract significant support in the primaries, and he withdrew from the race for the nomination in January 2008.

Mr. Thompson began acting when he was tapped to play himself in a movie about a lawsuit involving a clemency-selling scandal that brought down the Tennessee governor. By the time Mr. Baker talked him into running in a special election for Vice President Al Gore’s Senate seat, Mr. Thompson had 18 movie credits to his name.