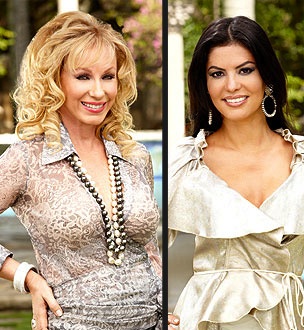 “What happened with Lea is the biggest disappointment of my life. She was someone who I thought was my best friend, who really had my back and would always be there for me. This season, she’s using something from my past against me as if I’m a criminal.”

According to de Moura, Black had an issue with the timing of her wedding and the filing of a marriage license.

“Frederic [Marq] and I, we first got together about five years ago. But we had only been together a couple of months when he proposed to me. So I started to plan everything and we were going to do it. We applied for the license and got the license. But my son was not showing too much enthusiasm; he was 9 at the time. He actually really freaked out. He was shaken at the idea of his mom marrying someone else. It was too much for him. So we called it off. We had a license, but for my son’s sake we didn’t go through with it. The whole thing was very emotional. But now it’s five years later, my son is older and we decided to go through with it. But now I’m hearing Lea’s telling people I’m a big liar because we’re already married. She also said I had used her for money. That’s a big lie. When she did help me, it was way before Frederic ever came into the picture. My son’s father and I had separated—he cheated on me with a young girl, and he left me with huge mortgages, huge financial liabilities, things I had to take care of. The economy was tumbling, my business was struggling, and what Lea did for me [was] bought some pieces of artwork, she bought pieces of jewelry for discounted prices. And now she acts like she supported me for seven years. She never paid my rent, she never paid for my bills, she never paid for my groceries, my car, my phone, nothing.”

Adriana has her reasons as to why Black is bringing up these issues now, issues that will be a big storyline in the new season of Real Housewives of Miami.

“I think its because this season, she didn’t have a storyline. So she needed to attack me. She sacrificed our friendship for a storyline. It got really ugly. She tried to put everyone against me. It made me think, ‘You were never really my friend to begin with.'”

Interesting. We reported 7 months ago that Adriana and Marq have been married for 5 years. Her publicist released Lynn Brodsky, this statement:

“Adriana met Frederic in 2008. On a romantic whim after dating briefly, Adriana and Frederic went to the clerk’s office on their own with no friends and family, and were married. There was a discrepancy in the certificate – so instead of having the marriage fix [sic] or annulled, they decided to take a step back and hold off until they were truly ready. Adriana and Frederic are planning to have a beautiful (and proper) wedding this spring.”

When asked about the alleged discrepancy, Lynn said “Marriage certificates are not valid by law if there is a typo. There was a typo on their certificate. I have no further comments at this time.”

So 7 months ago the story was they got married at the clerks office, then there was a typo in her name. Now her son had an issue with her marriage. The problem with lies is that you have to remember everything you say. The Real Housewives of Miami, premieres August 12th at 9/8c on Bravo. What are your thoughts? Post your comments below.

More in Real Housewives of Miami (29 of 74 articles)