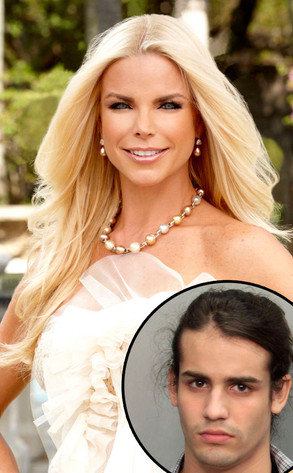 Peter Rosello, son of the Real Housewives of Miami star Alexia Echevarria, has been arrested again and once again, he managed to stay out of jail!

Peter, 20, the morally corrupt son of self confessed Cuban diva Alexia Echevarria, was picked up by North Miami PD and charged with possession of marijuana and possession of drug paraphernalia.

An occasional character on reality TV’s RHOM, Rosello made national news in October when he was caught after posting on Facebook a video that showed him violently kicking a homeless man in his genitalia for $5. In the footage, Rosello shows the man sound asleep on a Miami Beach street, then Rosello punches him the groin then runs away. Rosello called it “nut-checking.”

In a deal with prosecutors, Peter escaped jail after agreeing to enter a first offender program that included 100 hours of community service.

As for this latest arrest, according to records, Peter was a passenger in a Fiat that hit a parked car on Biscayne Boulevard in North Miami – then fled! It so happened that the car was an unmarked North Miami Police vehicle, and cops went after the Fiat. When they caught up and tossed the Fiat, police alleged found a backpack with marijuana in a jar and a pipe and, according to the arrest papers, Peter admitted the bag was his.

Prosecutors, however, agreed to drop the misdemeanor charges after Peter, a one time fashion model and the stepson of Miami political insider and lobbyist Herman Echevarria, agreed to extend his intervention program for another six months.

Said Richard Sharpstein, Rosello’s lawyer: “It wasn’t really his bag. He’s back in the program and once he completes it, his record will be sealed.”

It wasn’t really his bag? So whose bag was it? The Florida justice system is hilarious. RHOM third season starts on Monday at 9/8c on Bravo.

Check out the video of Rosello kicking a homeless man WARNING: GRAPHIC VIOLENCE

More in Real Housewives of Miami (28 of 74 articles)