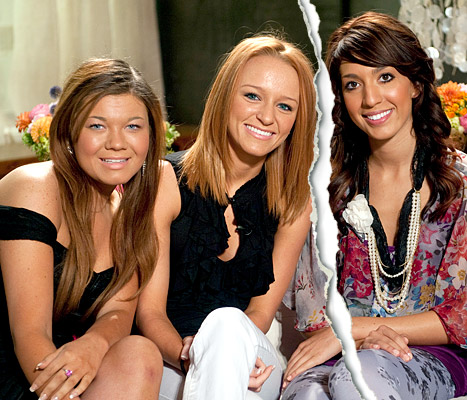 Teen Mom stars, Amber Portwood and Catelynn Lowell want Farrah Abraham off the show. The ladies of Teen Mom want MTV’s producers to get rid of Farrah Abraham the boot, or they’ll walk.

MTV aired successful catch-up specials last month with stars Amber Portwood, 23, Catelynn Lowell, 22, and Farrah, 22, the network has been wanting to “bring the series back,” an insider revealed.

MTV is taking the request seriously. “They would definitely consider dumping Farrah to get the other girls,” the insider tells Us.

Abraham, nevertheless, remains unaffected by her former costars’ demand. “I have my own life,” she tells US Magazine.

Since her days on Teen Mom, Abraham has continued her reality TV tour on VH1’s Couples Therapy with co-stars Jon Gosselin and Beverly Hills Housewives alum Taylor Armstrong, Farrah is the only single cast member of the show.

The mom to 5-year-old daughter Sophia also continues to pursue her music career. Abraham released her second single “Blowin,” along with a nonsensical music video on Monday, March 17. In her new track, she sings the lyrics, “Being a star is better than not knowing who you are.”