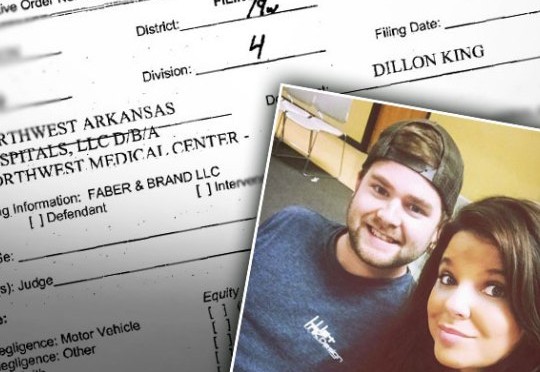 What will Uncle Jim Bob think of this crisis?

According to Arkansas’ Benton County Circuit Court documents exclusively obtained by Radar, the 28-year-old failed to pay Bentonville’s Northwest Medical Center $51,940.53 more than a year after receiving treatment at the hospital.

King was hospitalized from January 22 to January 25, 2015, an itemized receipt states. Though the court redacted the specific procedures, the treatment seems to stem from his car wreck that week.

“He had a head on collision…someone drove directly into his lane and hit him at 45 mph,” Amy told Instagram followers on January 24 of that year. “He has a broken femur, he has an 18 inch rod in his leg!”

Thankfully, King has a job to start the long payment process: The Duggar hubby owns Wet Ink Design in Rogers, Arkanksas. Amy, 29, is an aspiring country music singer, but doesn’t seem to be currently employed.

Facebook group Duggar Family News: Life is not all pickles and hairspray was first to report the lawsuit.

This isn’t King’s first run-in with the law. As Radar exclusively reported, he was arrested for driving under the influence in both 2011 and 2013.