The 53-year-od US actor, who starred in films including Donnie Brasco, Catfight and the remake of Psycho, did not regain consciousness after a car crash on the 5th August

Anne Heche, has died. Her rep states that Anne is “brain dead”.

The rep also states, that, “life support machines are keeping Anne’s heart beating for the purpose of preserving her organs for donations. Anne has no brain function.”

Statement from rep courtesy of TMZ: “We have lost a bright light, a kind and most joyful soul, a loving mother, and a loyal friend. Anne will be deeply missed but she lives on through her beautiful sons, her iconic body of work, and her passionate advocacy. Her bravery for always standing in her truth, spreading her message of love and acceptance, will continue to have a lasting impact.”

Los Angeles Police Department state that Anne was under the influence of c*caine and possibly fentanyl on the 5th August she committed hit-and-runs before crashing through a home and causing a huge fire, which took over an hour to extinguish.

In 2001, Anne married cameraman Coleman Laffoon, with whom she had a son. The marriage ended in divorce and in 2009, Anne had a son with James Tupper, her Men in Trees co-star.

Anne is survived by her two sons, Homer Laffoon, 20, and Atlas Tupper, 13. 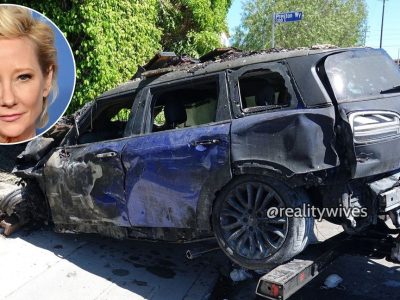