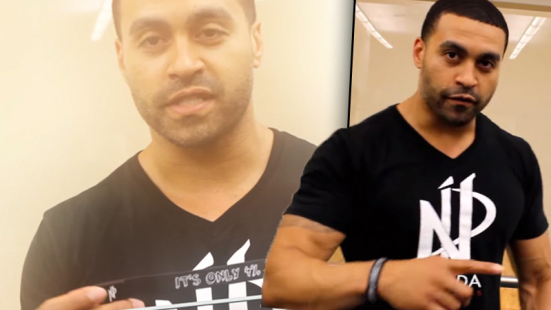 via Radar Online:
Apollo Nida won’t be confined by prison walls! The Real Housewives of Atlanta star is currently behind bars for the next eight years, and facing an impending divorce from Phaedra Parks, but Radar has learned he just launched a new business — from prison!

The imprisoned reality star and father of two has been posting from behind bars about a new workout plan called Nida Fitness 4%. According to the Bravo star, it is an inspirational program that attempts to motivate people to work out.

The program points out that getting one hour of exercise a day is roughly only 4% of a person’s day, hence the tagline for the company: “It’s only 4%.”

Nida’s new website, itsonly4perecent.com, is selling waterproof USB wristbands with the tagline written on them.

Fans can also watch a video of Nida promoting his new product.

Unfortunately, it doesn’t seem that Nida’s new business ventures have swayed his wife to stay with him. In a statement released by Parks’ rep on Oct. 10, it was revealed that Parks would be filing for divorce.

“Phaedra has retained an attorney with the intent of amicably ending her marriage,” the statement read.