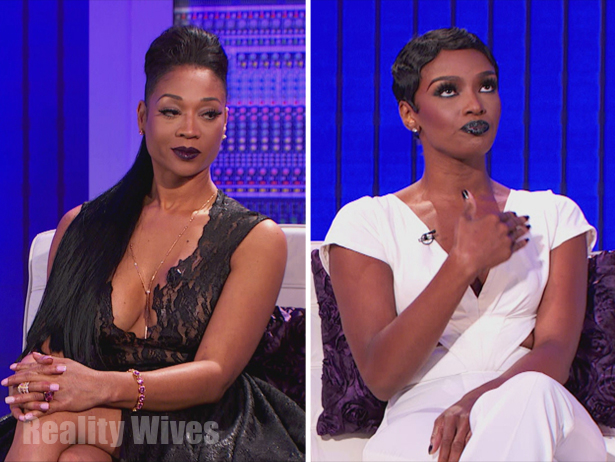 Ariane: How long have you and Mimi been friends?
VH1: It’s been about 11 years.

Women befriending women in their adult lives can be rare, how did you two link up?
There was this party in Atlanta we hosted together, and we were friends with the same person. We just kind of like gravitated towards each other from that moment, we just became cool. Mimi was really sweet; she’s always seen so sweet. I was like, ‘Okay, this girl’s gonna be in my life.’ You know, I claimed it. And she has been.

Sometimes you come across way too invested in Mimi’s love life causing people to think that maybe you like her more than a friend, at any point in the friendship were you romantic?
Noooo, no. If I wanted Mimi, I could have her. You know? Like that’s with anybody. I’m so serious. I can have anybody I f*cking want. But no, Mimi and I never crossed that line. It’s always been a special bond — a sisterhood of some sort. Like you know, there’s been no other kind of intimacy other than a true friendship between Mimi and I, and I would never cross that line.

Can you see why people could assume that?
Yeah, but people don’t know us, so I don’t feed into shit like that. You don’t know my life. You really don’t. You get a glimpse and moments of our lives. Like they don’t see the other side of Mimi because that’s not what’s shown [on television]. Like they don’t see how sweet she really is and how she’s also friend to me. That’s why I can be the friend I am to her because she’s that same person to me off-camera.

So Mimi is there for you as well, because it looks one-sided…
Absolutely, I wouldn’t have it any other way. I can’t keep people — I don’t invest my time and energy into somebody or something that is not being given back to me. F*ck no! I don’t do that. No, I’m 35 years old.

You are super protective when it comes to Mimi. Are you like that with all friends? Or do you feel like she needs special care like she needs extra?
I’m super protective about people who I f*cking love. I protect anything and anybody that I love. So yes she’s special because it’s a sisterhood, but Mimi needs that kind of love. She does. So, as much as she may try to push me the away, yells and screams but she does all that stuff to me because she knows I can handle it.

Being so close to Mimi, do you have explanation as to why you think Mimi is drawn to Nikko/Stevie J type guys?
Masochism. I think that she can be a masochism. I never thought I would be saying that, using that term, when it comes to her. But even she knows, really knows that she has a problem and why is it that she is attracted to these kind of guys. She needs to really sit down and have a session with someone else who doesn’t know her. She does, she needs to just do a complete cleanse of herself and get to the root of things, so she can figure out why is it that she is really doing this.

Why do you hate Nikko so much more than Stevie when they both have had their faults?
The difference is that I know Stevie. What angered me with Stevie is he knew how vulnerable she was. And he would always use that shit to his advantage and just shit on her. As f*cked-up of a guy that he can be, he’s lived up to the shit that he has done. He understands that her hurt her. I can respect that he knows it. Now I think Mimi allows it, and I can’t even be mad at either one of them anymore. With Nikko, I just don’t like Nikko because he’s never given me any reason to like him. He’s not, he’s not authentic. His aura isn’t pleasant. I don’t like being around him. I just don’t. There’s something, there’s something that’s just not right.

Yes, you said that at the reunion, we thought another fight was going to break out between you and him, like your hand was tingling to smack him…
Yes, yes, I wanted to, but you know that’s taking me out of my character. If Mimi’s not gonna hit him for the sh*t that he’s been doing, why am I? That’s when I had to shake my head. He’s not worth it. I really have a strong dislike for him. I really do. But he doesn’t matter. Like girl if that’s who you want to be with, fine. I don’t have to deal with that anymore. I don’t. I’ve got my own sh*t.

Speaking of fighting, why was Nikko no where to be found?
Yeah! WTF was that!! He didn’t call her the entire time. She had her phone the entire time. I was right there and I was wondering what — like what do you mean you couldn’t get to her?! [My girlfriend] Toni was outside, and she’s not even on the cast! She came up to that 6th floor room and made sure I was okay. What?! Nikko! What?! Get the f*ck out of here! He’s a clown!