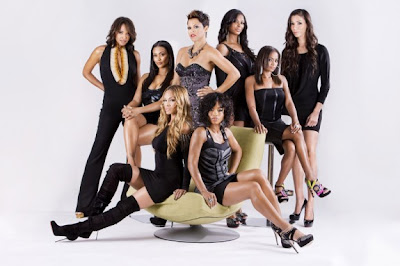 Suzie and Gloria are now in a tight knit clique and Suzie doesn’t care about being in a circle? Really! Lie.

Since when were Suzie and Gloria friends? Gloria must be beside herself with excitement as she now has a friend on the show.

The circle was never a problem until Evelyn called Suzie out for her talking about her behind her back.

Juli Richmond a new cast member joins and has been married for 17 years to Mitch Richmond and Kimberli Russell married to Bryan Russell for 16 years. Shaunie introduces Jennifer to the real basketball wives for them to offer some advice and her crumbling marriage. They ask her about her marriage and sex life and Jennifer plays coy and doesn’t want to talk about it.

Evelyn is sending threatening texts. Now that is a little too much and too far. You already has had it out with Suzie not once, but twice and Evelyn is still talking about the problem. Evelyn do you miss Suzie? Well either hash it out, go to a therapist or stop it, now. It’s not a good look.

Watching Kenny and his daughters talk about their problems is heart breaking, how sad that their meeting had to take place on camera and not before the show.

Shaunie introduces us to her new eye candy Marlon, they go horseback riding, Shaunie has on her sweetheart voice 🙂

We meet Ashley another new housewife or in this case girlfriend of Rafer Alston.

Jennifer wants to confront a woman who puts her friend Laura’s phone number on Craig’s list, who does that? the accused obviously denies this.

Why would you send threatening text message when this was happening to you last season with your stalker, Evelyn?

Tami meets Kenny’s wife during a sit down, the most mature scene I have seen since this season started. Good for Tami and Tasha.

Kenny is a stay at home dad of course completely different from the Kenny, Tami experienced during her marriage.

Suzie is thinking about leaving realty and pursuing broadcast journalism, that will be a lot of work, she needs to work on her lisp.

Jennifer receives a text message that Gloria and Matt are not getting married. Jennifer and Evelyn goes into an excited frenzy trying to find out more information on the matter.

Kenny apologizes to Tami for his behavior during dinner.

Gloria: The wedding got bigger than the relationship.

Whatever! If that isn’t rubbish.

You either want to get married or you don’t.

The ladies are going to surprise Suzie and Gloria after Royce lets them know about the lunch. Next week Gloria give Shaunie a piece of her mind.

Next week:
Shaunie and the ladies confront Gloria about why her wedding was called off. Jen and Eric have a pivotal conversation.