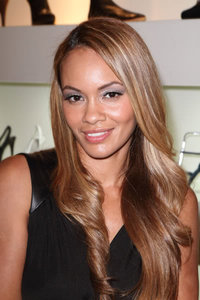 Out in a Miami-Dade County Court, she claims the website defamed her in an article “falsely stating that she had cheated on her fiancé, Chad Ochocinco, with his friend, Terrell Owens. A blog on VH1 her employers, even posted the same mess on their site. Why anyone believes any of the ‘exclusives’ from this site is beyond me, they print nothing but lies and garbage.

She claims the website defamed her in a posting on the 2nd September that ran under the headline:

“‘Evelyn Lozada from the Basketball Wives was CREEPING … with one of Chad’s BALLER FRIENDS!!!’ (Explosive Details).“

She claims the website did it again 4 days later, in “a follow up article falsely stating that Lozada was ‘knocked up’ and was quitting the show ‘Basketball Wives,’ to become a ‘full-time mom.'”

Evelyn says none of those claims are true. She says Media Take Out rejected her request for a retraction. She adds that the defendant “boasts on its home page that it is ‘The Most Visited Urban Website in the World.” Evelyn claims the articles have been read by more than 250,000 people and republished on other websites.

“As a direct and proximate result of the publication of the aforementioned defamatory statements, Lozada suffered reputational and professional damage, damage to her business, and severe emotional distress,” she says. She seeks punitive damages of $15,000 plus lawyers costs and fees. She is represented by David Pollack.