Reality television is great! A way for me to ignore my real life and the drama that entails. Even I have to wonder, what the hell, when reading and finding out about more info 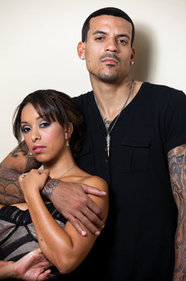 about my shows. Here is a statement from Matt Barnes the ex-fiance of Basketball Wife Gloria Govan.

In May, Gloria and I decided to separate and in the best interest of her career, I foolishly agreed to portray that we were still together for the upcoming season off her show on VH1. As recently as August we decided to revisit a joint statement of our separation, but Gloria asked to delay making our separation public for the interest of her show. It is ironic now how Gloria is trying to manipulate the professional relationship between Eva Longoria and myself as the sole reason for our separation, when she knows we split up in May. The reason I broke my silence and released the separation statement a month ago, was due to her on going affair with a former friend of mine. Again, I wish her nothing but the best and I will continue to keep our children as my first priority.

Well damn! What on earth is going on? I have been hearing crazy rumors of Gloria sleeping with random men in a club and sleeping with rapper The Game. I guess people either are slack in morals or enjoy the notoriety. Gloria hasn’t denied this when Malaysia told them what she heard from a Basketball Wife while they were in Hawaii and hasn’t denied Matt’s statement yet….

Gloria responds:
So Matt’s at it again I see… Whatever he feels like he needs to say to justify our separation is on him. Obviously his relationship with Eva is important enough to bash me. So I wish him and her nothing but the best. Ad will continue to focus Me and out kids. Happy thanksgiving everyone xoxo