Laura has a 23 carat engagement ring from her on and off again fiance Gilbert Arenas.

Doug Christie makes an appearance – who states respect and communication is the key to marriage. She let him off the leash for an hour.

Draya makes it known that she wasn’t explicitly invited to Jackie’s 16th wedding but was just told about the arrangements, so that is why she felt that she wasn’t invited to the wedding. Also it is brought up that Draya said Jackie was crazy about her man then Jackie said she was psycho about her man. Is Jackie on drugs as she was upset for the very statement she claims she was not upset about. The ladies didn’t even look Doug in the eye for fear of Jackie’s mess.

Doug: When you blaze your own trail people call you all kinds of crazy

This episode was all about the ladies against Jackie and reminding her of her lies. Jackie felt she was a mentor and felt there was a lot of miscommunication. Did Jackie watch any of the episodes? John asked the ladies if they have contacted Jackie since Black Friday, they all say no, until Malaysia remembers she contacted her when Jackie’s mother died. They they all remembered that they had contacted her. Jackie starts to cry and said don’t bring up her mother. I’m confused, they only mentioned they reached out to her when she was grieving. I believe she cried as she obviously was sad about her mother and that fact that she behaved so badly on national televison.

There has to be a season 2 of Basketball Wives LA there was too much drama and mayhem!

Here is the reunion for your enjoyment…

If you missed the blogs about Ta’Kari Christie, here are the articles: 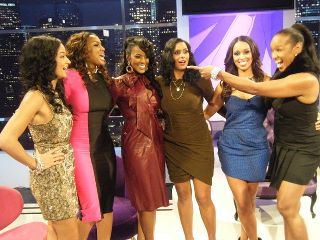