Part two of the reunion starts off with Evelyn and Chad. Chad’s idea of a wedding is completely off. He says, “They’re getting ‘hitched’, not married.” Evelyn & Chad’s new show will premiere in September which shows the planning and the eventual wedding.

Royce explains that Dezmon hurt & humiliated her by his actions. Dezmon was sexting his baby momma. She claims she is not a serial dater. Royce states her relationship with her father is a little better. The reunion shows Royce’s acting in the play. Why wasn’t this shown on the series?

Watching Tami again in Tahiti was disgusting & embarrassing for the human race. Evelyn & Shaunie didn’t say a word (shame!!) Tami wanted Kesha to stand up for herself; in her words all Kesha does is talk about her behind her back. Tami states she shouldn’t say anything about her in her interviews on the show. Don’t they all talk about each other in the interviews? What makes Tami exempt?

We finally get to “UPS”, aka Suzie, who claims she didn’t tell Tami anything about Kesha. Tami thanked Suzie at the table, for what she said. So what’s going on there? Somebody is lying. Tami wants Kesha to acknowledge what she has done to put Tami in that place. Tami is an adult; no matter what someone says nobody can make you do anything you didn’t already want to do. Tami already did apologize for her behavior, but who the hell is going to want to have a civil conversation with someone who behaved like Tami? Not unless you’re a MMA champion fighter.

Then Tami said Kesha left her bag on the chair, Kesha was 15 meters away from her bag. Tami picked it up to give it to her. That’s theft & holding it for ransom. Stop the crap! You didn’t have to touch her bag or go through it! Tami doesn’t feel bad about the message, but feels bad about the delivery. Then you’re not sorry Tami. If Kesha doesn’t speak up for herself. That’s Kesha’s personality.

Tami: I’m not a bully, I was loud, I was boisterous & I was over the top. But I do not bully people.

News Flash: Tami You Are A Bully

The Tami & Kesha interaction was horrible. Kesha is not anyone that can handle any conflict let alone Tami. Tami was wrong & until she owns up to her wrong-doing she will always have anger issues.

Kenya and Evelyn, patched over their bottle throwing issue.

Shaunie admits that what Nia did was wrong. Shaunie doesn’t want anyone to go to jail because of a mistake and asks if Nia apologizes would she drop the case. Would Shaunie drop the case if someone smacked her in the head? Shaunie is amazed at Jennifer’s response.

We finally get to UPS aka Suzie. Who claims she didn’t tell Tami anything about Kesha. Tami thanked Suzie at the table, for what she said. So what’s going on there?

John brings Evelyn & Jennifer together & they hug, they started to cry & I started to cry. Bloody Hell!!! I don’t cry, ugh!! But I hope they sort it out. Evelyn is crazy & Jennifer is too, but I like them as friends. Jennifer sensibly said ‘let’s not do this here’, which gives me the impression that they should and will talk properly off camera, good girl. 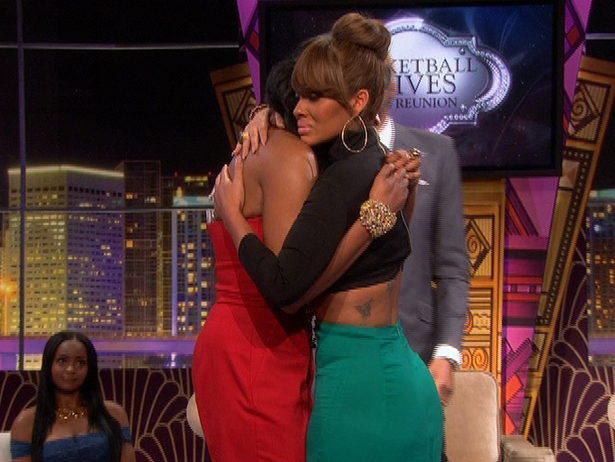 They replay Shaunie’s visit to her pastor; she thinks that people think she is a hot ghetto mess, as she is exec producer of a hot ghetto mess show – & rightly so. Handle your employees Shaunie.

The reunion ends and all the ladies hug it out. Until season 5….