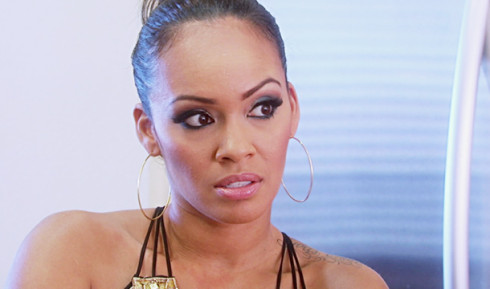 During the first scenes, we are reminded of Evelyn’s sad tale of marriage to Chad Johnson and divorce 41 days later after she found a condom wrapper in his car. She claims they ended up in a physical confrontation and on top of that, her brother in law who walked her down the aisle died after a long battle with cancer. Remember this happened approximately a year ago, so when they started filming this was a little fresh in everyone’s mind.

Evelyn says she didn’t tweet or talk to the media, as she needed a bigger platform to explain what happened. So she decides to speak to ABC’s Nightline which aired on the 1st, September 2012. She talks to her publicist about what people are saying about her and because of

her behavior on Basketball Wives – throwing bottles at people, fighting, cursing, getting angry at the drop of a hat, among other things. She feels everyone feels she deserved it, it was her fault and blame her for ruining Chad Johnson’s career.

As Evelyn prepares for interviews to tell her side about the incident, in New York, she calls her mother to give her a pep talk.

This episode is all about Evelyn and her victimization and abuse at the hands of her hideous husband. Although what Chad did was extremely wrong. No man should ever hit a women, just leave the area, don’t worry about your manhood, because if some of these men hit a woman, most of the women would be unconscious as most men can pack a horrific punch.

My personal belief on the whole situation is that Evelyn probably got into Chad’s face and Chad not wanting to lay a ‘hand’ on her used his head instead. Not a good move, but in the heat of the moment, it happened. As media whorish and ridiculous as Chad is, I can’t see him behaving like a bull over being questioned about a condom wrapper as honest as he has been about his whorish ways and then to add insult to injury, ran up to her from about 10 ft away and just head butt her like a crazed bull. But even with all that, Chad was WRONG! But I could be wrong about my theory. Evelyn was left with a nasty wound on her forehead, which required 6 stitches.

The producers finally allow us to see Shaunie and Tami. Shaunie is now proclaiming she isn’t going to sit on the sidelines anymore, (while pulling on everyone’s puppet strings), she will now be more vocal. Hurrah for Shaunie, her true personality will finally make the light of day. Let’s see what Shaq was really dealing with. Tami has broken up with her boyfriend, writer and director, Jerry Lamothe. And unfortunately her mother, Nadine Buford is dying. Miss Buford passed away recently on the 23rd July 2013.

Evelyn travels to Los Angeles to visit her daughter Shaniece, and Shaniece divulges that she has never likes Chad and no one else did. Really? You could have fooled me. Not once did Shaniece ever mention she didn’t like Chad. I recall the scenes in which they were all together, Shaniece looked happy. Is Shaniece hoping to become an actress? She’s off to a good start.

Evelyn visits pimp master Shaunie and they talk about the Chad situation. Again.

There is no doubt that Chad was wrong for head butting Evelyn. He admitted she never did anything. He probably just got frustrated with her nagging him about the condom wrapper. But this episode was all about Evelyn talking about Chad and their ill-fated ‘relationship’ and ‘marriage’.

The ladies all meet up without new cast member Tasha Marbury who has yet to make an appearance. Suzie shares that she has facial surgery – had her jaw broken and it appears her lisp is gone. She also admits she’s been celibate for 10 months. Suzie? Really? That’s new. Tami wants to know what happened between Evelyn and Chad. Evelyn explains that if she is going to cheat on her with a bird, she wanted to know about it. But then said she wasn’t having any of it in her marriage. During her one-on-one she wanted Chad to choose what he wanted to work on their marriage or to “smash” whoever he wants to, not both. Tami’s angry bird Roman’s word of advice to Evelyn was that if Chad was trying to make it work and Evelyn was willing to take him back. They should basically get back together as ‘mistakes will be made and mistakes will always be made’. No one backed her up or disagreed with her to her face. Only Shaunie asked ‘would you give your daughter that same message’, to which she replied, ‘yes, I would and have’. I don’t know anyone who has been abused, may be, because I would call the police on the perpetrator. But I could not give anyone advice to go back to someone who I know was or is abusive. Tami is the last person I am going to for advice about relationships, parenting, anything. Tami may keep it real, but her anger issues especially from last season haven’t been forgotten. Her behavior towards Kesha Nichols was terrible.

From the preview of the season there will be at least one physical fight. What Basketball Wives without a fight? 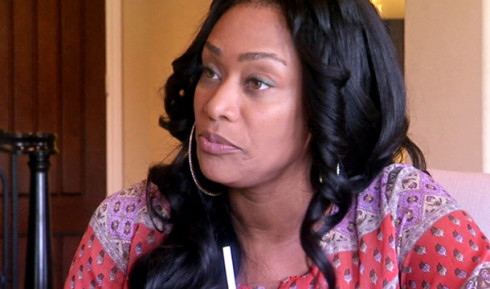