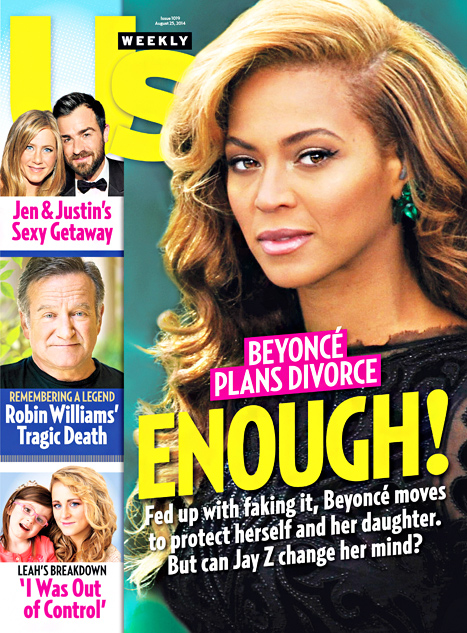 via US Magazine:
Could Beyonce be a “single lady” once more? Now that the singer has finished the last of her On The Run U.S. tour dates with husband Jay Z, speculation about the couple’s marriage is at an all-time high. Fans are wondering if the spouses of six years will go the distance — but Beyonce is already making moves toward a split, sources reveal in the new issue of Us Weekly.

Insiders tell Us the music superstar, 32, has a plan of action in place for if/when she decides to call it quits with her rapper hubby, 44, dad to her 2-year-old daughter, Blue Ivy. One source says “she is done” after their remaining On The Run shows in Paris, France.

Rumors about the state of the couple’s union have been rampant ever since footage leaked of Bey’s younger sister, Solange, fighting with Jay Z in an elevator at the Standard Hotel after the May 5 Met Ball. The “Crazy in Love” singer has done her best to quiet the chatter with happy family pictures posted to Instagram, but insiders say things aren’t so rosy behind the scenes.

A source previously told Us Weekly that the spouses “stayed separately” while in New York and L.A. for their On The Run tour. And another insider said Beyonce went without her husband to look for apartments in Manhattan, including a $21.5 million penthouse in Chelsea.

For more on Beyonce’s marriage woes — including details on her escape plan, her worries about what one source calls Jay Z’s “wandering eye,” and how she’s leaning on newly single pal Gwyneth Paltrow — pick up the new issue of Us Weekly.

All of a sudden everyone seems to have the inside scoop on Mr & Mrs Carter’s marriage, when they didn’t know about any of their business before. I call this a ridiculous rumor. What are your thoughts? Post your comments below.