Nick Gordon Punched Out Bobbi Kristina’s Tooth & Dragged Her By Her Hair, Because She Was Leaving Him 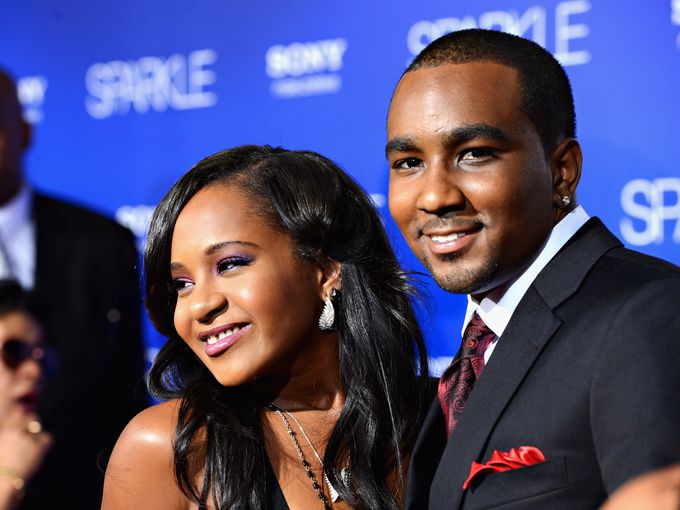 via 11 Alive:
A lawsuit filed by Bobbi Kristina Brown’s conservator accuses Nick Gordon of abuse and claims he took money from her without authorization.

The suit, filed in Fulton County Superior Court on Wednesday by Brown’s court-appointed conservator Bedelia Hargrove, accuses Gordon of assault, battery, intentional infliction of emotional distress, and transferring money from her account into his own without authorization.

Bobbi Kristina Brown, 22, has been unconscious after being found unresponsive in a bathtub in her Roswell home on Jan. 31. Earlier Wednesday, her aunt said that her condition has deteriorated and she’s been moved to hospice care.

The lawsuit alleges that Gordon presented himself to be Brown’s surrogate brother prior to 2012. After Brown inherited a substantial sum of money (presumably from her mother, Whitney Houston’s estate), Gordon “assumed the position of Brown’s boyfriend.” Around Jan. 9, 2014, Gordon “perpetuated the fraud that he had married Brown, though in fact he never did so,” according to the lawsuit.

According to the lawsuit, Gordon used that “misrepresentation” as Brown’s husband to “control Brown and limit with whom she could interact.” The suit alleges that Gordon answered Brown’s cell phone, wouldn’t allow her to make appointments without his permission and “manipulated her bank relationship so that she could access her money.”

Gordon allegedly transferred Brown’s money into an account solely controlled by him without her authorization. According to the lawsuit, Gordon began to question Brown’s access to trust funds, and “threatened one of the trustees with guns and other violent weapons. That trustee obtained a restraining order against Gordon on April 14, 2014, the lawsuit states.

The lawsuit accuses Gordon of domestic violence against Brown, including punching her in the face, knocking out a front tooth and dragging her upstairs by her hair.

Brown allegedly confided to an unnamed person that Gordon “was not the man she thought he was” and set up a time to meet on Jan. 31, 2015.

That day, Brown got into an argument with Gordon. Brown was later found unconscious, face-down in a bathtub with her mouth swollen and another tooth knocked out, according to the lawsuit.

Brown has since been diagnosed with “global and irreversible brain damage.”

While Brown was in a coma, Gordon allegedly stole $11,000 from Brown’s bank accounts.

The lawsuit alleges Brown has suffered “life threatening bodily harm and damages,” and asks for damages of at least $10 million each for the assault, battery, intentional infliction of emotional distress, and conversion. It asks for an amount to be determined later for counts of quantum meruit/unjust enrichment and attorneys’ fees.

Hargrove said in a statement:

Pat Houston and Bobby Brown have done all they can to take care of Bobbi Kristina since this terrible tragedy occurred. I have worked closely with both of them and we all want the very best for Bobbi Kristina. This lawsuit represents our collective efforts to get justice for Bobbi Kristina.

We pray that justice will be done for her and that it will be swift.

Dustin Diamond Sentenced To 4 Months In Jail For Stabbing Case