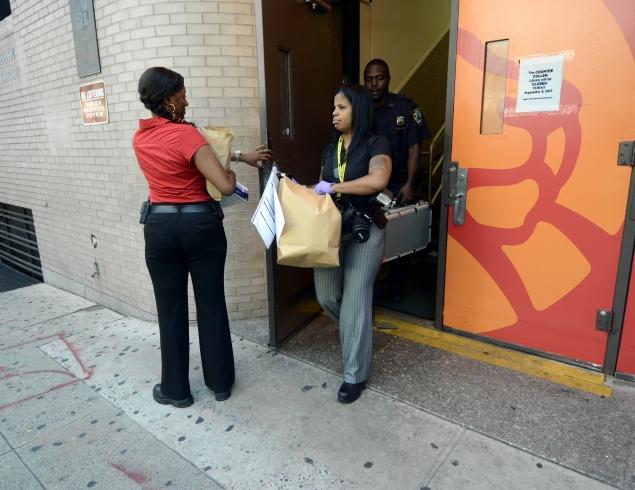 The suspect was charged with second-degree rape and unlawful imprisonment, sources say. During the sickening 20-minute assault, the boy forced her to perform oral sex on him before he raped and sodomized her, the source said.

via NY Daily News:
A 13-year-old boy was charged Thursday with the shocking rape of an 8-year-old girl in a New York Public Library branch in Harlem, after the victim told her mother she was lured into a bathroom and attacked. The suspect, whose name is being withheld by the Daily News because he is a minor, was charged with second-degree rape and unlawful imprisonment after being questioned at the 32nd Precinct stationhouse, sources said.

A source said the boy was caught on security cameras at Countee Cullen Library on W. 136th St. near Lenox Ave. leading the girl into a bathroom Wednesday afternoon. The gruesome attack occurred at 4:15 p.m., shortly after the young victim arrived at the library with her 8-year-old brother and her 54-year-old female babysitter, sources said.

The girl apparently wandered away from her brother and babysitter as they were perusing books, sources said. She went up to the second-floor mezzanine where she encountered the suspect, whom she recognized from previous trips to the library, according to sources.

“He verbally lures her into the bathroom,” a law enforcement source told The News. “Once they’re inside the bathroom, he locked the door so she couldn’t get out.”

During the sickening 20-minute assault, the pubescent perp, described by sources as a troubled foster child who’s been bounced from home to home, asked the girl for a kiss then forced her to perform oral sex on him before he raped and sodomized her, the source said.

The boy immediately fled the library following the assault. The girl didn’t tell her mother of the rape until about 8 p.m. Wednesday. The mother sensed something was amiss with her daughter and questioned the girl until she told her the sickening details of what happened, sources said. The devastated parents immediately took the girl to the 32nd Precinct stationhouse to report the rape.

Cops identified the suspect by scouring security video with the library branch manager, who recognized the youth, sources said. Police took the youngster into custody Thursday when the branch manager called to tell them the boy showed up at the Schomburg Center for Research in Black Culture around the corner from the library. They found him in a bathroom at the center. The boy is expected to appear in Manhattan Family Court on Friday.