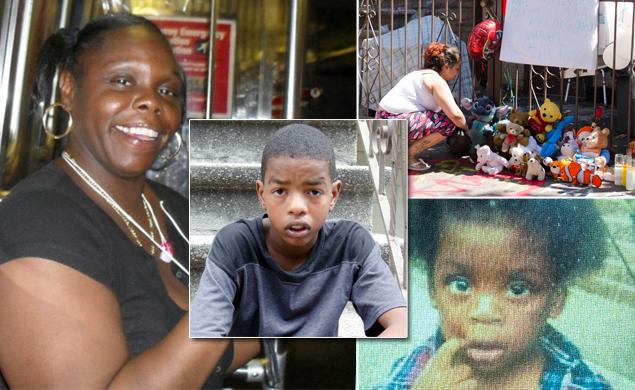 via NY DAILY NEWS:
A state-licensed day-care provider apparently walked to the grocery store after she allegedly killed a 20-month-old boy by “wrestling” with him and tossing him in scalding water.

A 12-year-old neighbor said he saw the lifeless body of Cardell Williamson when he helped Athena Skeeter carry grocery bags into her Bronx apartment Friday afternoon.

Isliel Hayward-Barnes told the Daily News Monday that little Cardell was naked, wet, stiff, cold to the touch and propped up on Skeeter’s living room couch. He said the child appeared to have tape on his mouth and scrapes on his face and head.

“I’ve never seen anybody dead. I didn’t realize he was dead,” Isliel, breaking into tears, said after his mother, Shirley Hayward-Barnes, 54, gave The News permission to speak to him.

Isliel lives about a block from Skeeter in the same building where Cardell resided with his father, Carlyle Williamson, 56. While they’re not related, Isliel called Cardell his “cousin.”

The boy said he ran into Skeeter about 2 p.m. Friday, when she returned to her College Ave. building with bags of groceries. He said Skeeter’s mother, Cora Cross, 65, was sitting in a rocking chair in the kitchen.

“I saw my little cousin on the couch,” he said. “I went over to him. He wasn’t moving. He was butt naked and he was wet. He had masking tape on his mouth.”

He said he immediately told his mother, who called 911.

Skeeter, a state-licensed day-care provider since 2005, is charged with manslaughter and endangering the welfare of a child. She’s being held without bail.

She told detectives Cardell fell unconscious after she threw him on the hardwood floor while “wrestling,” stepped on him and tossed her 3-year-old son on him.

Skeeter said she put the baby in the bathtub and when she came back, he was submerged in a tub of steaming water.

Police arrived at Skeeter’s apartment later Friday and rushed Cardell to Bronx Lebanon Hospital. The NYPD would only say the case remains under investigation.

The manager of Compare Foods on 170th St., around the corner from Skeeter’s home, told The News he saw her buying groceries in the store Friday afternoon.

Cardell’s father said city officials referred him to Skeeter as part of a back-to-work program run by the Human Resources Administration of the Department of Social Services.

The state Office of Children and Family Services revoked Skeeter’s day-care providers license on Monday and opened an investigation. Records show that Skeeter has been cited for minor violations in nine inspections of her facility since 2008 by the state office and the city Health Department